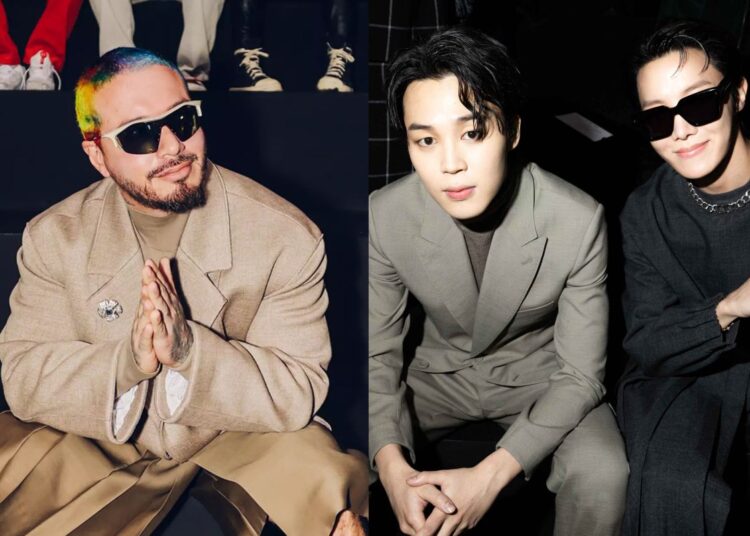 BTS‘ Jimin and J-Hope shined with their appearance at the Paris Fashion Week Dior Fall 2023 Menswear Fashion Show. The idols were joined by other global stars such as model and actress Naomi Campbell, actor Robert Pattinson and former footballer David Beckham.

During the Dior fashion show, the K-Pop stars were seated between Campbell and Colombian singer J Balvin, one of the most popular and influential Latin artists.

THIS LINE UP OF J BALVIN, JIMIN, JHOPE AND NAOMI IS INSANE https://t.co/4myRR1EP4i

The reggaetonero and the K-Pop group members met at the 2022 GRAMMYs and later the solo artist met Jimin and J-Hope at the Dior fashion show.

You may also like: BTS’ Jimin thanks J-Hope and ARMY for his Paris Fashion Week experience

The producer had nothing but praise for the South Korean septet after chatting with the idols. He also revealed that he would love to collaborate with them after a media asked him about a possible collaboration.

“I’ve met them before and they are great. I would like to, why not?“.

“They sing in Korean; I’m Latin and I sing in Spanish. It’s about having a global reach.

You have to learn a little bit about the culture and the sound, but I think it’s great. People connect with their music, which means they’re doing the right thing“.