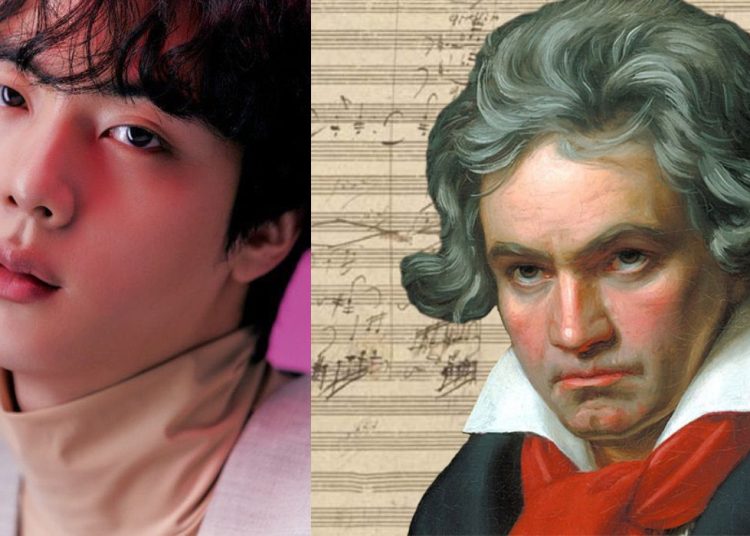 Jin, 29, compared his BTS group member Jimin to German classic musician Beethoven on a live transmission that he shared with fans.

BTS, just in case you have been living under a rock, is South Korean pop group that’s been on the industry for almost a decade, they are currently still very active, and they seem to be on the peak of their fame. The seven members frequently interact with their fans live broadcasts through a popular south Korean platform called Weverse, most of the times, each member will do a live transmission apart, and other times, all of them together.

On this occasion, the oldest member, Jin, made a comment on the Weverse Live of his group member Jimin, making a remark of the alikeness of Jimin with German musician Ludwig van Beethoven, who was a composer, pianist, and orchestra director, remembered as one of the most important composers in classic music’s history.

Here’s a tweet shared by a fan portal of BTS, showing the interaction.

Hobi commented on Jimin's Weverse live, “my hair grew a lot” and here Jin talking about why your hair looks like Beethoven sunbaenim 😂😂 2Seok are deep down in ARMY twt. #Jimin #PARKJIMIN pic.twitter.com/EzMHobu3pf

The comparison was not well received by most internet citizens who argue that it’s illogic to compare Beethoven, to a pop group member, regardless of the amount of success they’ve had or the number of records they may have broken, as they are not on the same level.

An angry user took to twitter to make this comment: “So he just went ahead and compared his team mate to the biggest contributor to music’s history as if it was nothing? Lol, BTS’ public is clearly 12–15 year-old lil girls.”

The boy band announced a hiatus on their commercial activities on past June 14th, though there are already planes for new music releases as both, solo artists and as BTS.

BTS’ J-Hope shares photo of his first tattoo. Check out

Rihanna reveals she is going to be a psychopath mom