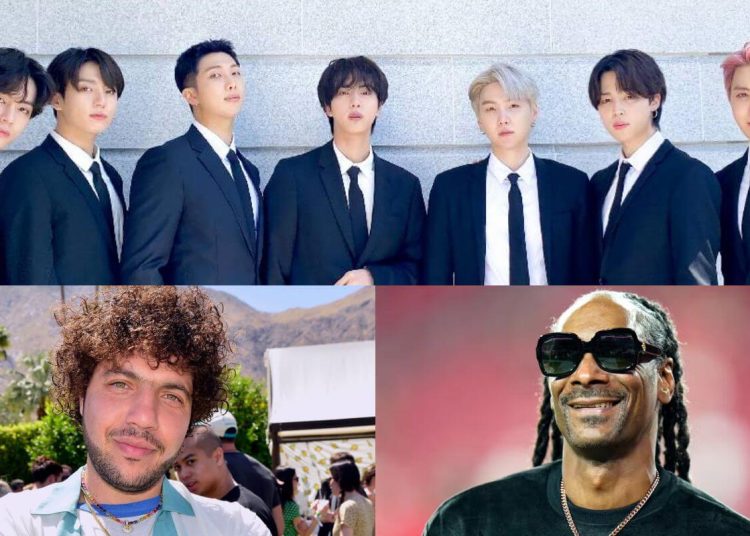 BTS will team up with Snoop Dogg and Benny Blanco for an unprecedented collaboration in “Bad Decisions“. The song was announced this Wednesday, July 20th, by the artists via Twitter with a humorous promotional video.

Despite being very focused on their solo careers in parallel with the group, the singers remain very integrated with BTS. So much so that they shared a short video on their Twitter page, which consisted of a video call with Blanco, where they appear talking about the collaboration that will be released on August 5th on the platforms.

In the recording, the American producer appears, in a good-natured manner, begging the BTS boys to be part of the K-Pop group:

“Hey, guys. Look, I know we haven’t known each other long, but I want to be in the band.

I want to be in the band, I want to sing and dance.

I think I could“, he jokes.

“No“, joke the BTS members together.

“But we can make a song together“, Jimin added.

The excited producer had more to say about the collaboration in a statement where he expressed his surprise and joy for the new project.

“I’m still pinching myself“, he shared.

“I can’t believe a song with BTS and Snoop Dogg is coming out – it doesn’t even seem real!“, stated the artist.

“Bad Decisions” is the lead single from Benny Blanco’s third album, which will be released later this year.

Blanco also revealed the promotion schedule of the track on social networks. The release includes the unveiling of the single, music video teasers, a lyric video and a recording sketch on YouTube on August 5th.