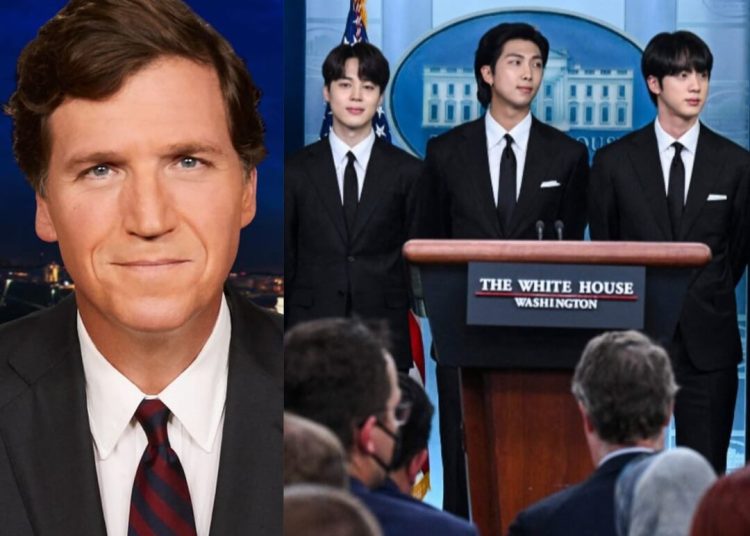 A host ridiculed BTS‘ visit to the White House, sparking controversy. The K-Pop group visited the White House on May 31st at the invitation of US President Joe Biden to conclude Asian American and Native Hawaiian/Pacific Islander Heritage Month (AANHPI).

In a 35-minute conversation with President Joe Biden, BTS shared their thoughts on countermeasures against anti-Asian hate crimes, as well as Asian-American tolerance and diversity.

However, after the meeting, Fox News host Tucker Carlson derided BTS’ visit to the White House as downgrading America’s status. Carlson also said that his comments may anger the BTS ARMY fandom.

You may also like: TWICE’s Nayeon debuts as a solo artist alongside Stray Kids’ Felix and Little Mix’s Jade Thirlwall

“Things have gotten very bad for Joe Biden, both public-facing and internally. What are they doing about it? Well, they broke glass in case of emergency and invited a Korean pop group to speak at the White House today“, Carlson said.

“Yeah, so we got a Korean pop group to discuss anti-Asian hate crimes in the United States. OK. Good job, guys”, he added.

“Yep, they hate the country and they’re trying to degrade it. … And it’s working“.

Things are going so poorly at the White House that even the media can no longer ignore it. pic.twitter.com/wmqZxpi81r

The group’s meeting with the president was closed to the press, but Biden tweeted:

“It was great meeting you @bts_bighit. Thank you for all you do to raise awareness of the rise in hate crimes and discrimination against Asians. I look forward to sharing more of our conversation soon“.

It was great to meet with you, @bts_bighit. Thanks for all you’re doing to raise awareness around the rise in anti-Asian hate crimes and discrimination.

I look forward to sharing more of our conversation soon. pic.twitter.com/LnczTpT2aL