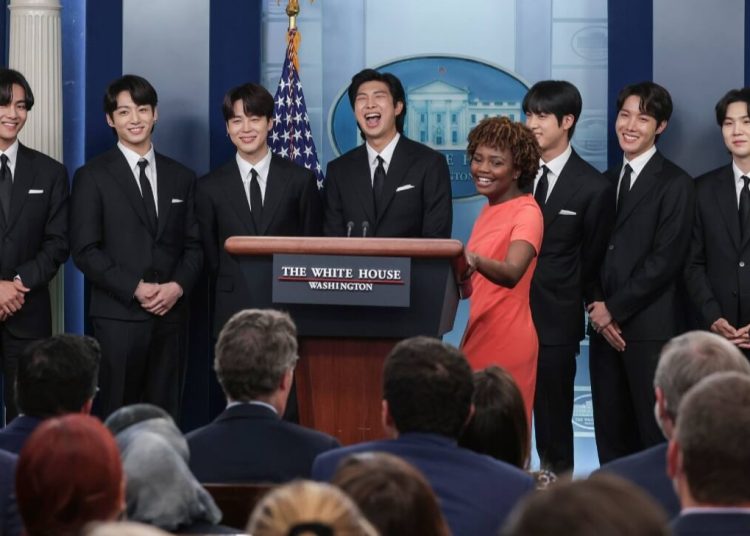 BTS was invited by President Joe Biden to the White House on May 31st to commemorate the celebration of the Asian community in the United States and discuss important related issues. In addition, their role as disseminators of positive messages to young people was also on the agenda of this meeting.

The meeting between the K-Pop group and the president took place in private, however the artists appeared at a press conference officiated by Karine Jean-Pierre, secretary of the White House. RM began the speech speaking in English, the other members of the group spoke in her native language.

“Hi, we’re BTS and it is a great honor to be invited to the White House today to discuss the important issues of anti-Asian hate crimes, Asian inclusion and diversity. We thank President Biden and the White House and for giving this important opportunity to speak about important causes, reminding ourselves of what we can do as artists“, the group leader began.

“Today is the last day of AANHPI Heritage Month. We joined the White House to stand with the AANHPI community and to celebrate”, Jin said.

“We were devastated by the recent surge in hate crimes, including Asian American hate crimes. To put a stop on this and support the cause, we would like to take this opportunity to voice ourselves once again” continued Jimin.

“We are here today thanks to our ARMY: Our fans worldwide who have different nationalities and cultures and use different languages. We are truly and always grateful“, added J-Hope.

“We still feel surprised that music created by South Korean artists reaches so many people around the world, transcending languages ​​and cultural barriers. We believe music is always an amazing and wonderful unifier of all things“, Jungkook said.

“It’s not wrong to be different. The quality begins when we open up and embrace our differences“, Suga mentioned.

“Everyone has their own history. We hope today is one step forward to respecting and understanding each and every one as a valuable person“, stated V.

“Finally, we want to thank President Biden and the White House for giving us this valuable opportunity to speak out on important causes; and remind ourselves of what we can do as artists. Once again, thank you very much”, the leader pointed out again.

SEVENTEEN surpasses major artists in album sales in 2021, according IFPI