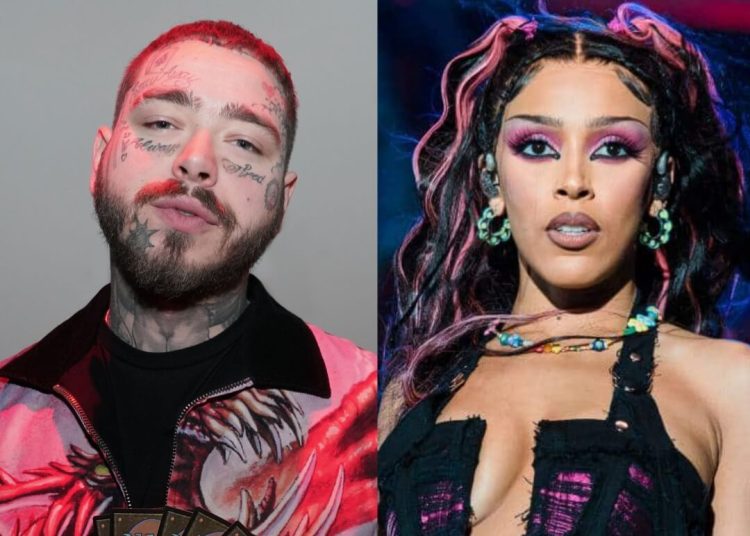 Post Malone has been piqued fans’ curiosity by claiming he’s ready to release his new album. However, a novelty took the music world by surprise this Saturday, April 23rd.

Is that during a live on Instagram, the artist revealed a partnership with Doja Cat.

In conversation with fans, the rapper showed a snippet of the song, telling details of sharing vocals with the “Planet Her” star. “She is so incredible! I am so blessed and so honored to have worked with her”, he highlighted, during the online broadcast. It didn’t take long for the two artists’ fans to celebrate the partnership that has everything to be a hit.

This is Post Malone’s first album in three years. Apparently, the released date for the album should be in May. In the live, the artist played some songs from the upcoming album, which will have 14 tracks. He was clearly very happy, emotional and involved with each one he played for his followers.

You may also like: Sam Smith announces new single titled “Love Me More”

After winning her first Grammy and talking more than once about retirement, Doja Cat took the stage at Coachella 2022 as one of the most anticipated performers of the night, the penultimate in the main stage line-up on the last day of the first weekend of the show.

With a repertoire full of hits and in the greatest rock n roll vibe, Doja Cat also performed unreleased music at her show at Coachella 2022, which took place this Sunday, April 17th, the last day of the first weekend of festival week. It is worth mentioning that it also returns to the festival tomorrow night, April 24th.
C