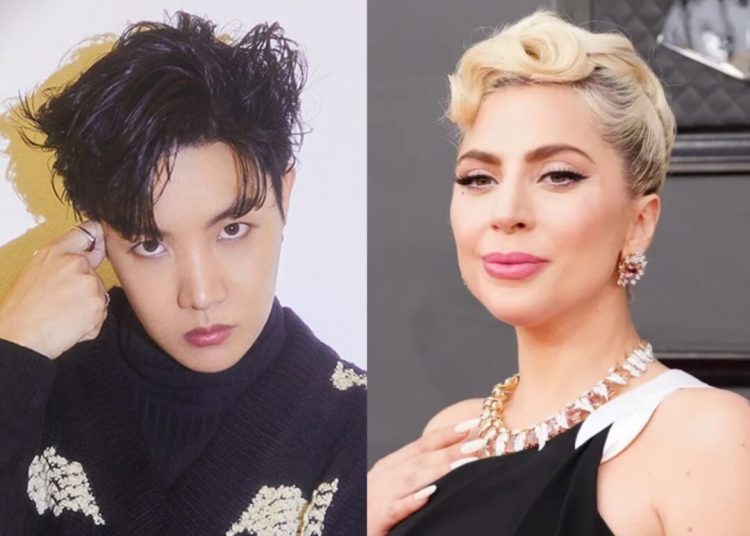 The night before day 3 of ”PTD on stage Las Vegas”, BTS‘ J-Hope was seen at Lady Gaga‘s concert. The South Korean artist enjoyed the virtuous performer’s show, met her backstage and then dedicated an emotional message to her on Instagram where he declared his admiration for her.

On Friday, April 15th, the famous ‘mother monster’ performed a show called “Lady Gaga, Jazz and piano“. Through instastories, Jung Hoseok showed off her premium pass and revealed to the world that she was present at the Dolby Live Park MGM theater.

J Hope attending at Lady GaGa’s concert enjoying his time makes me happy to see that he’s there to have fun and enjoy the moment. Y’all better not ruin his moment and just have fun pic.twitter.com/iIPh6x4Nf2

After revealing her location, some ARMYs who were also at the scene recognized him. Hoseok enjoyed the show so much that he stood up to dance during a few songs.

The Kpop star’s presence caused such a furore that a group of fans gathered outside the event to catch a glimpse of him as he left the venue. J-Hope went to his hotel in a vehicle but they are not before opening the window and greeting the ARMY who were waiting for him.

The member of BTS lived the opportunity to meet behind the scenes with Lady Gaga and exchange a few words. Photos were also taken that were shared by Hoseok on Instagram, which was accompanied by an extensive message of thanks and admiration for the artist.

“Today was a really glorious day.
When it comes to a show, there’s none like Lady Gaga!!!

It was a special day for me, since I wanted to see her performance so much.
Today, on the stage she was incredible, but off the stage she was so professional and there was so much to learn from her, and every comment from her for me will stay with me for my whole life.
C

Thanks to you, today I discovered the beauty of jazz!!!

– Today was a really glorious day.
When it comes to a show, there's none like Lady Gaga!!! It was a
special day for me, since I wanted to see her performance so
much.
Today, on the stage she was incredible, but off the stage she was so professional + pic.twitter.com/Fc0X14L9cE

BTS almost ruined their GRAMMY performance with this mistake (VIDEO)