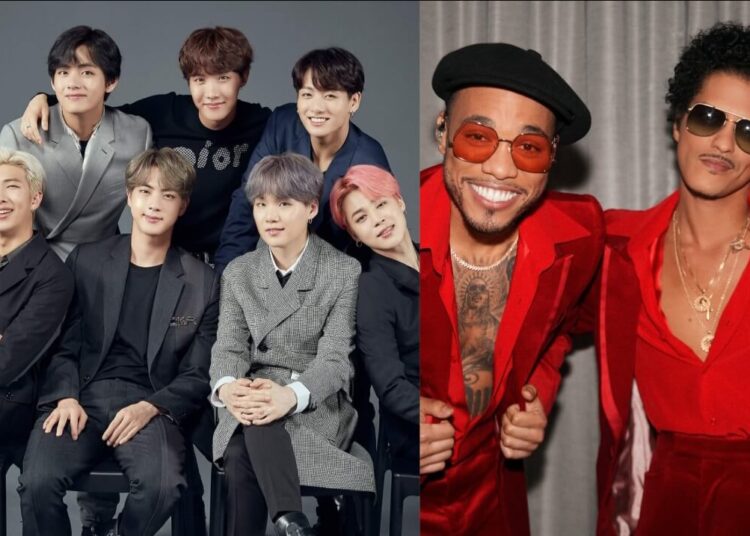 On April 1st, BTS’ Jimin and Namjoon revealed on their personal Instagram accounts a snapshot together with American super duo Silk Sonic, causing a sensation among modern music fans. Rapper Suga is also present in the shot.

The Bangtan fandom, ARMY, thought that it was a montage uploaded by famous Koreans on the occasion of April Fools’ Day in South Korea, because they had joined the date with jokes online and the leader RM published it and promptly removed from the social network, then reuploaded it.

OMG! NO APRIL FOOLS!
Park Jimin, Suga, and Namjoon all look amazing with Bruno Mars and Anderson Paak for the Silk Sonic concert in Vegas last night.
Glad they will be sitting by each other and Halsey at the Grammys on Sunday as well.#bts #PTD_ON_STAGE_LAS_VEGAS #BTSTICKETS pic.twitter.com/otQsVhCTL1

However, the snapshot also stands out in the respective feeds of Bruno Mars and Anderson .Paak. Thanks to the description of Mars, it is known that this photo belongs to the backstage of the concert that he performed together with .Paak as the duo Silk Sonic on April 31st in Las Vegas.

Remember that BTS arrived in the American city days ago and are preparing to participate in the 2022 Grammys and the new stop of the four-date face-to-face show “Permission to dance on stage”.

Some attendees of the show affirmed hours before having seen Bangtan in the place, but this could not be confirmed then because there were no photos or videos, since the use of cell phones was prohibited. According to fans who watched the show, it was .Paak himself who announced the idols as his special guests.

people r saying that anderson paak himself said that bts attended silk sonic concert, there are no photos and evidences for it because photos and phones usage arent allowed 😭😭 pic.twitter.com/xrqWcGvpf7