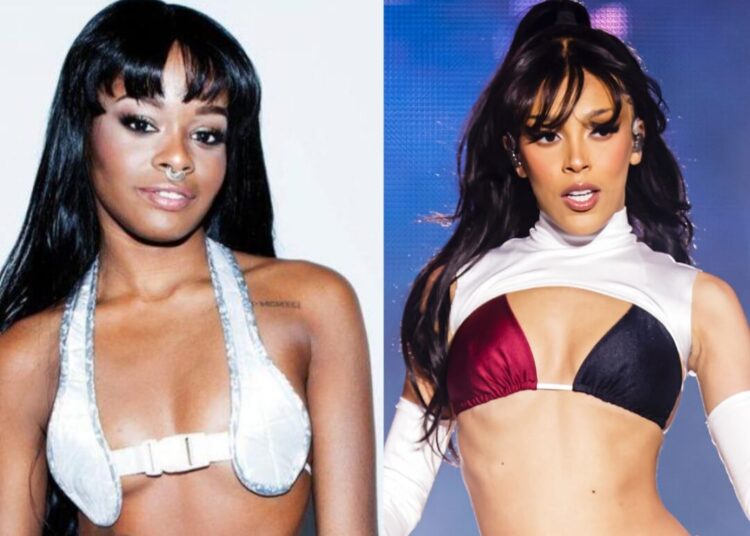 During one of her recent lives on Instagram, singer Doja Cat danced to “1991”, a song by rapper Azealia Banks. Fans shared the information with the New York artist, and through a story, she responded by inviting the Californian to a feat!

“Alright sis, I just finished the sound track to PFW 2022.

Text me, deadline is tight. The gays are waiting the beef is stale, then we and go NFT. We not giving Luke shit.

U bring the waist, I’ll bring the seamoss and let’s get these hoes”, she wrote.

In other moments of the live, Doja also listened to “212”, “Van Vogue” and “Count Contessa” So, will the feat come?

In other related news, Doja Cat usually performs lives on her social media to communicate with her fans while doing other activities. Always fun, the singer made a broadcast in which her followers could follow her makeup.

You may also like: Kanye West debuts romance with a model identical to Kim Kardashian

As she worked out the details of her makeup, the rapper showed a long snippet of an unreleased song, which could be released soon. The song was reportedly titled “What You Wanting”.

Two weeks ago, Doja released the video for “Get Into It (Yuh)”, a song that is on the acclaimed album “Planet Her”. Released in June 2021, the disc features hit singles such as “Kiss Me More” (with SZA ), “You Right” (with The Weeknd ), “Need to Know” and “Woman”.