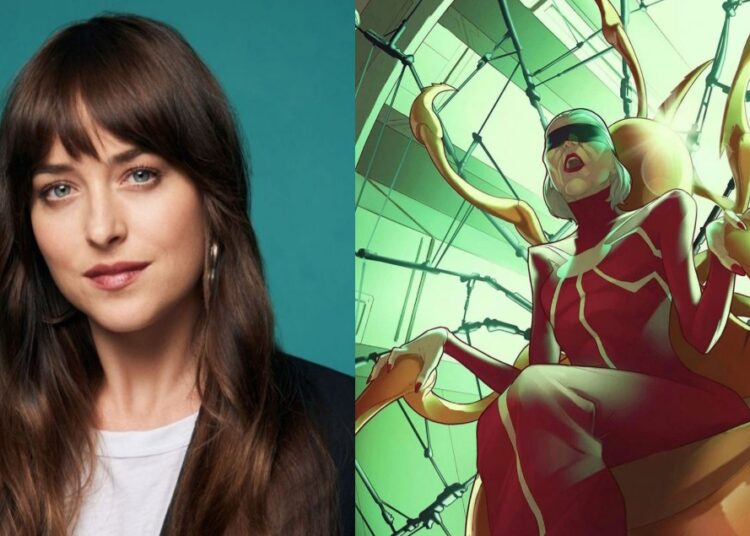 Dakota Johnson is chosen to star in “Madame Web“. This is the next film in the Marvel universe derived from the “Spider-Man” saga and whose rights are owned by Sony Pictures.

According to an exclusive from Deadline, the actress is in talks with Sony for her lead role in the film. The actress is known for appearing in “The social network“, “The lost daughter” and in the trilogy “Fifty shades of Grey“.

The details about the plot and script of “Madame Web” are still unknown. This will become the first Marvel film based on a superheroine since Sony Pictures has the rights to exploit the franchise. It was believed that this would happen with the character of Gwen Stacy, however Madame Web was chosen.

Dakota Johnson is entering the Spider-Verse.

Johnson is in talks to play the title character in #MadameWeb, the Sony spinoff centered on the #SpiderMan character

In the comics, Madame Web, whose real name is Cassandra Webb, is an elderly woman who suffers from a degenerative genetic condition called Myasthenia Gravis. This disease forces her to be connected to life support that, due to its characteristics and technological frameworks, is similar in appearance to a spider’s web.

The characteristic of the character is her mental and psychic abilities that make her a powerful clairvoyant, being a precognitive mutant that usually helps Spider-Man in some of his adventures. The film will be directed by S.J. Clarkson, who recently executive produced “Anatomy of a Scandal”.

You may also like: Chris Evans is embroiled in dating rumors with a netflix actress

The worldwide success of “Spider-Man: No Way Home“, which is already the fourth highest-grossing film in the history of the United States with a total collection of 735 million dollars, has led Sony to continue betting on the saga with this spin -off.

Red Velvet’s Seulgi will debut as a solo artist

OnlyOneOf offers suggestive posters to those who buy their new album