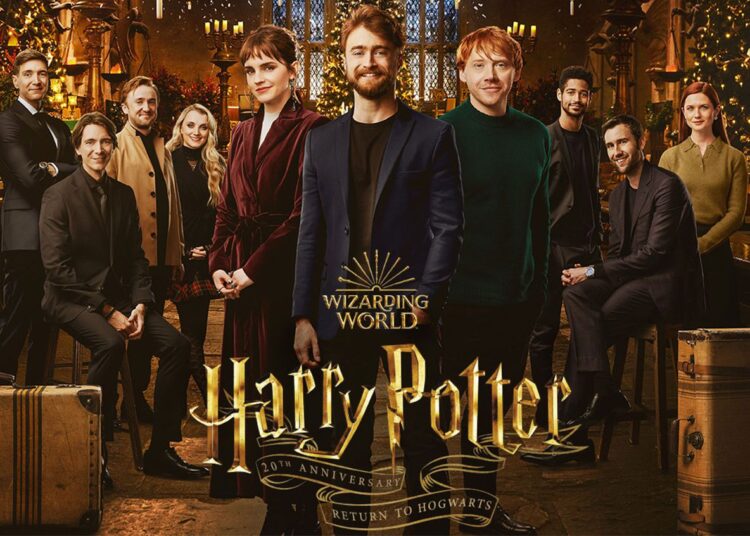 HBO Max has revealed a new trailer for their highly anticipated New Years special with “Harry Potter: 20th Anniversary Return to Hogwarts“. The reunion filmed in London that will include Daniel Radcliffe, Emma Watson and Rupert Grint will premiere on New Years Day, January 1st, 2022.

Previously, they alerted fans with the release of a teaser that brings the full list of confirmed actors, the clip also included images from the films in the franchise. However, the trailer features the main trio in the Gryffindor common room, reminiscing about the decade they spent together while producing the film collection.

“I think this is the perfect time to sit down with everyone and remember” added Grint, 33.

“What scared me the most was the implication that the most significant thing in our lives had been done. And there’s something so happy about seeing everyone and being like it’s not like that“, Radcliffe joined them.

The actress who gave life to Bellatrix Lestrange, Bonham Carter, shared some of her favorite moments during the filming of the franchise, more specifically “Harry Potter and the Deathly Hallows: Part 2“.

On the other hand, Fiennes, who played Voldemort, the dark lord who infamously “unnamed”, shared how he once questioned taking on the villain role.

“What! Have you been asked to play Voldemort? You have to!“, He added, imitating his sister.

The trailer concludes with the trio laughing, crying and holding hands while listening to the following phrases:

“I wouldn’t be the person I am without so many people here“, Radcliffe said.

“There is something about ‘Harry Potter’ that makes life richer“, Watson added.

“We are a family and we will always be a part of each other’s lives“, concluded Grint.

Disappearances of fans reported after the canceled concert of Stray Kids

The iconic squirrel from Ice Age is not in the new movie, here’s why