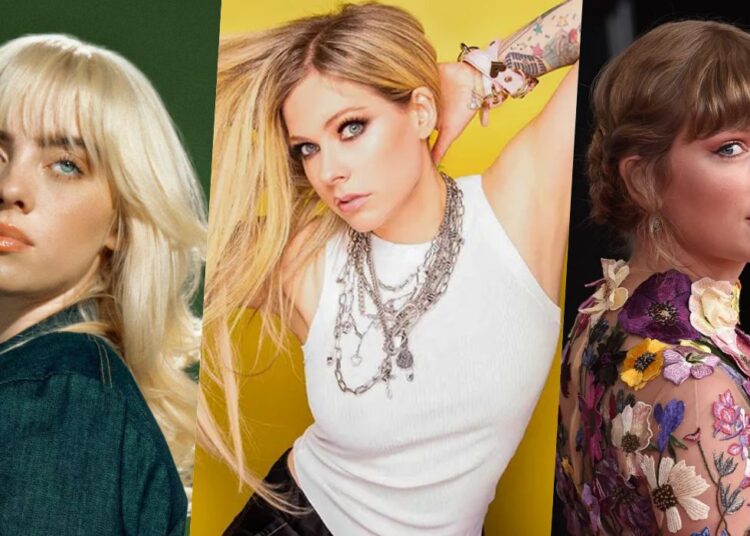 Avril Lavigne, who is about to release her new album, may not look it, but she is a veteran of the music world, she will soon celebrate two decades of her career. With that, she has the baggage to recognize who is doing a good job.

She recently praised Olivia Rodrigo, saying she was the one who brought rock back to the charts, and in a recent interview she acclaimed Billie Eilish and confessed that she has been listening to a lot of Taylor Swift songs. All of this was mentioned in an interview with ALT 98.7 radio.

“Billie Eilish, I love what she is doing amazingly musically and visually. In the pandemic, I listened to a lot of vinyl and I really liked what Taylor Swift did with her ‘folklore’ album”, she commented.

As soon as Taylor Swift released ‘folklore‘, in June 2020, Avril spoke up and even made a “stories” on her Instagram and wrote: “new album looks beautiful, congratulations on rocking again”.

The two already shared the stages in 2015 during the 1989 Tour. They sang “Complicated”, Avril Lavigne’s first hit and an epoch-making hit.

You may also like: Doja Cat cancels shows after team members test positive for Covid-19

Many of Billie Eilish’s generation may not recognize the importance of the Canadian, precisely because they are not at her peak, but this is not the case with Eilish, who assumes that she is his great idol. “Thank you for making me who I am”, she wrote in the caption of a photo of both of them.

“THANK YOU FOR MAKING ME WHAT I AM.” pic.twitter.com/Teu4AkxNu0

With that, Avril Lavigne proves to be a great supporter of Billie. In an interview with Billboard, she reflected on the importance of being influenced by younger artists.

“It’s an honor any time someone especially for someone as talented, cool and creative as Billie, mentions that I’ve had an impact on their music career”.

“My approach has always been like: I’m going to be myself, write the songs I want to write, dress how I want to dress, because when I got into the industry, everyone was showing their bellies and there were a lot of dancers around them. and it was gum, and I was so different. I was wearing baggy pants, Converse, like a guy, and playing loud guitar in my songs” she says.