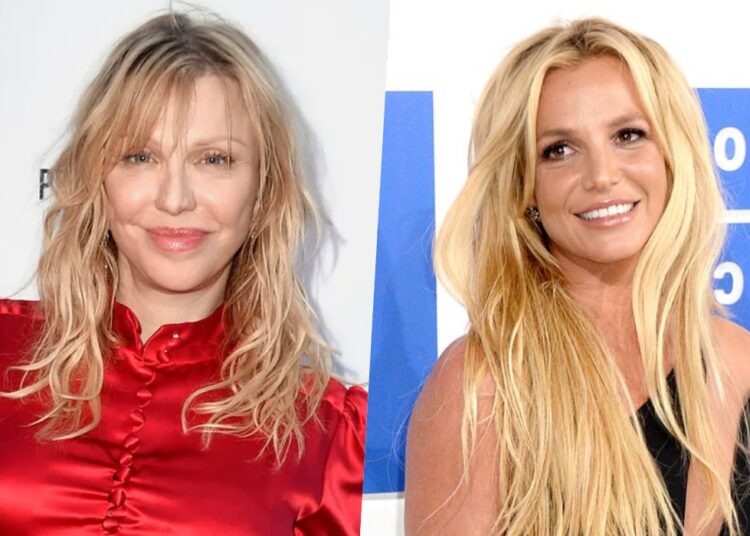 Living in the UK, Courtney Love has advised Britney Spears to leave the US when her guardianship ends, which could happen on November 12th. In an Instagram post, the artist was direct:

“Get out of the United States” she wrote.

“For 13 years I’ve been trying to get someone to take you out of the United States. I go out and thank God” continued the former Hole singer .

Courtney Love kept telling the pop star not to be afraid. “You didn’t do anything wrong” notes the rocker, who criticized the pursuit of “mainstream stardom” “When you told Penny, ‘I wasn’t good. I was great,’ you were right. You are an artist. Fuck being a ‘celebrity’” she noted.

“Your fans and those who aren’t your fans are ALL rooting for you, no matter what you do. Even if it’s never anything. Even if you stumble. So, fuck it” added Love.

Also in her text, Courtney advised Britney to leave her lawyer, Matt Rosengart, to handle the matters involving guardianship.

“He will still be governor because of you”, she wrote.

Courtney IG post is lit and its funny that a lou client, Steven Tylers daughter, Liv, liked it. https://t.co/sFafWnfenL pic.twitter.com/zNu7vsh2WW

You may also like: Harry Styles joins to MCU in the upcoming movie ‘Eternals’

At the end of her publication, Courtney quoted Miley Cyrus and said that the singer was no longer a hypocrite because she changed her manager. The veteran said the singer left Larry Rudolph, accused of masterminding Spears’ guardianship, and replaced him with a “wonderful and honorable” agent.

“Hi Miley. You asked if I was mad at you. Yes, I really was. And now you know why. And now I’m not mad at you anymore” wrote the leader of Hole.

According to Courtney Love, Jennifer Lopez and Miley Cyrus reportedly cut out certain people from their management after finding out they had a connection in the highly abusive Britney Spears conservatorship. #FreeBritney pic.twitter.com/dPcQkWAg3o

Miley Cyrus actually changed managers a short time ago, but she replaced Adam Leber and not Larry Rudolph, who she hadn’t worked with in years. Adam and Larry, however, were business partners and both had been involved in Britney’s career over the past few decades. Leber also looks after the careers of Lil Nas X and The Kid Laroi.