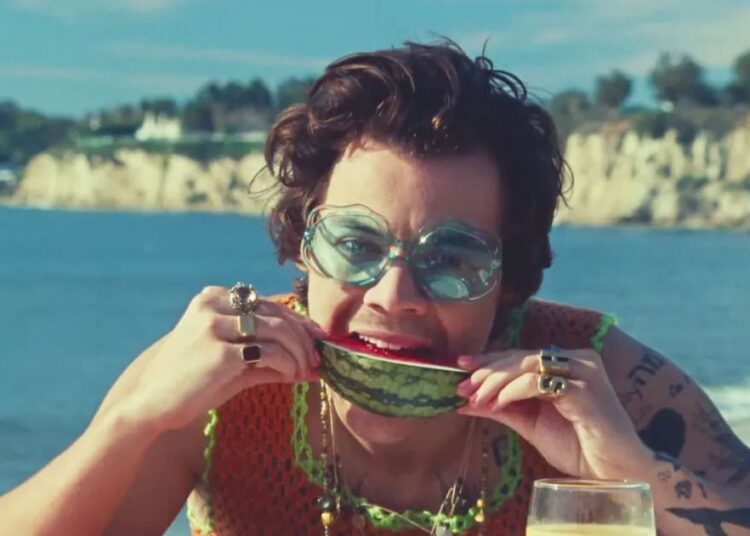 Enough of speculations! Last Friday, October 1st, singer Harry Styles confirmed the meaning of the lyrics of his hit “Watermelon Sugar”, which for a long time inspired several theories, although the most accepted was the analogy with oral sex.

At a show in Nashville, the artist began by saying “It doesn’t matter what it’s about”, trying to leave things a little open for interpretation before claiming that “Watermelon Sugar” is about “The sweetness of life… and also the female orgasm”.

So far Harry Styles has not confirmed or denied the theories about the song. He preferred to let each fan have their own interpretation, without compromising anyone’s relationship with his lyrics.

You may also like: Miley Cyrus invaded Megan Thee Stallion’s stage and twerks with the rapper

“I tend not to explain the songs very much, because I think it’s important to let people give them whatever meanings they want. There are songs that I loved until I found out it was about something else, and I was like ‘I didn’t want to know this because it meant so much to me’ It’s wonderful that people can relate to your music” he said in an interview with Tiny Desk.

In other releated news, Harry Styles’ new tour is taking place in the United States and he’s giving a lot of talk. This time, the British singer performed in Saint Paul, Minnesota, when he stopped the performance to respond to a request from a fan. Holding up a sign, the fan asked, “Should I text him?”. Then, Harry set out to answer the fan’s question.

“I have a question: is he nice to you?” The artist asked.

“In my opinion, if you should (text him), this is not even a question” he said.

“If we’re wondering if we’re playing games, if you’re wondering, ‘Should I text him? Should I not text him?… ‘I can’t text him too soon.’ Now we’re thinking about double texting, and that’s a whole different risky business… It’s a whole thing” Harry Styles declared.