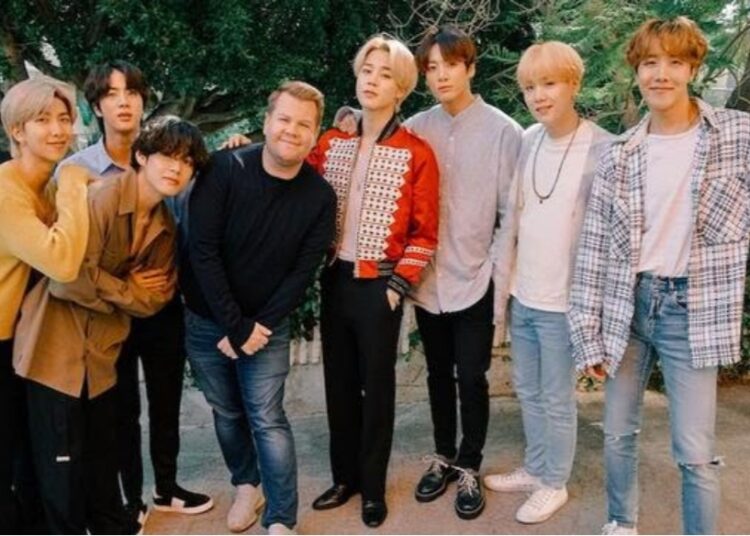 The ARMY, despite the good image they have of the presenter of ‘The Late Late Show’, did not miss a comment out of place

As is customary, the large number of followers of the boyband usually respond when haters or anyone who makes a negative comment about the group, makes the South Korean team uncomfortable. This time, it was the host of ‘The Late Late Show’ who got the worst of it.

And it is that despite the relationship with artists, actors and television stars, Jungkook, Jin, V, RM, Jimin, J-Hope and Agust D are not exempt from some inappropriate comments. Yet there is the ARMY to tackle on behalf of the Bangtan Boys.

What did James Corden say about BTS that angered ARMY?

In the United States he has a great career on television, among other things, thanks to hosting “The Late Late Show.” Full of charisma, he has had BTS several times, until he was proclaimed as ‘Papa Mochi’ by being very close to Jimin.

Bangtan Sonyeondan’s presence at the UN as South Korean ambassadors has represented an important moment for the band, but Corden said that BTS’s appearance is unusual and that his fans, “fifteen-year-old girls” for him, would see for the first time. once to one of the characters who attended.

ARMY was also forthright: “Officially ARMY disinherits James Corden from the title ‘Papa Mochi’ and we honored the only one worthy of the position, Jimmy Fallon, with the job. In any case, that the title be discontinued due to the disgrace it caused. We promote it to ‘Jimmin Fallon’ as a senior title, “commented one of the members.

Red Velvet’s Wendy opens up about her bisexuality

MBC under fire for racism with its treatment of aespa members