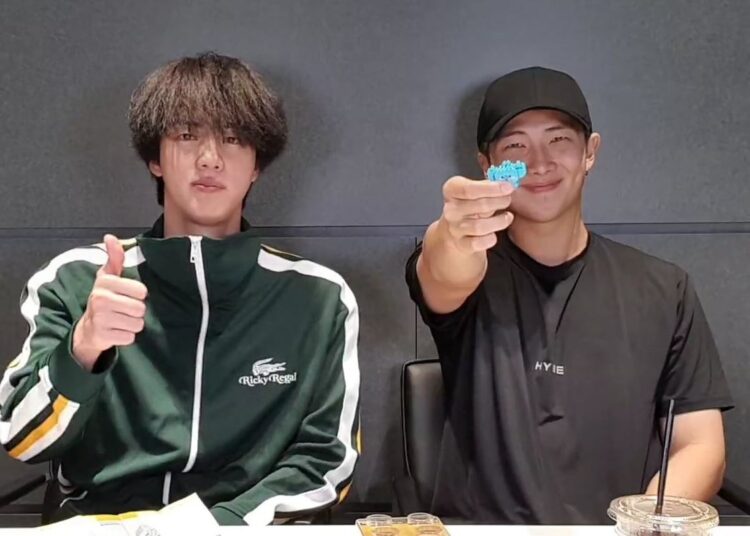 As announced by the BTS members, Jin and Namjoon held a live broadcast from VLive, where they amused ARMY with their funny occurrences and shocking revelations.

Namjin, was the title of the live stream between Jin and Namjoon, which surpassed 5.2 million views and 323 million hearts three hours after the end of the video.

At the beginning of the broadcast, the BTS members confessed that they did not had dinner yet, so they showed their food plates.

THIS IS MY FANCAM FROM NOW ON ????❤ NAMJIN MADE MY DAY pic.twitter.com/GeygIHwv4X

After eating, Jin and Namjoon said that they were going to build their RJ and Koya figures in Lego during their VLive broadcast. At the end these were his comments:

Jin: Should we show our results to the camera? Are they my ideas or does RJ have a lot of legs?

Here our cute RJ and Koya!
Namjoon: We finished it!

One of the most shocking confessions was when Jin and Namjoon revealed that they don’t like avocado and they surprised ARMY. Although Kim Namjoon was wearing a hat on the live stream, the BTS leader went to Weverse to reveal his new look.

You could also be interested in: TWICE’s Jeongyeon hesitates to renew contract with JYP according to netizens.

Regarding the band’s new music, the guys spoke sarcastically about what’s to come. “We are sorry, we were creating a choreography and we could not eat“, said RM to which Jin added “That’s right and I will say in advance that we do not have an album that will come out soon“, Namjoon concluded “Yes, there is nothing of that“.

Of course, the words of Jin and Namjoon made fans who are already used to this kind of sarcasm very emotional when they realized new BTS album is on the way really soon.