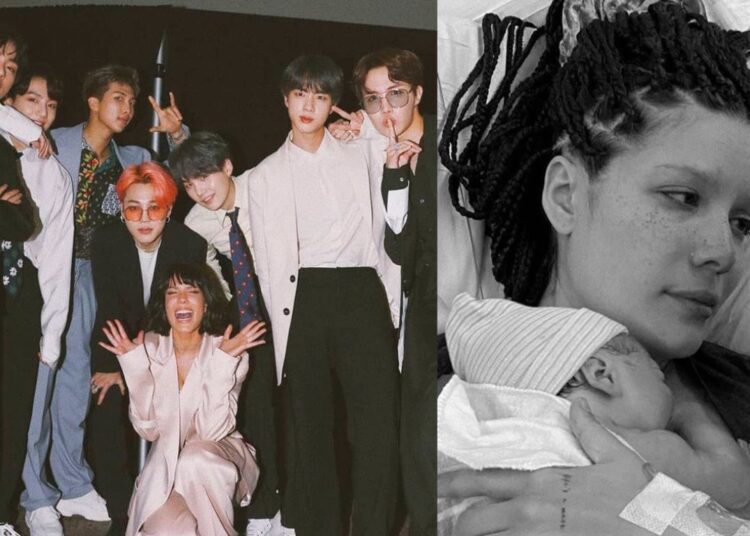 Ender Ridley Aydin was born and BTS did not hesitate to congratulate Halsey on becoming a mother. In January, American singer Halsey announced that she was pregnant. This July 19, she confirmed the birth of her first baby, Ender Ridley Aydin, and, as expected, BTS could not forget to greet her for this tender moment.

Through her social media, the artist shared two photographs of the most awaited moment by everyone who will become a mom or dad. “Gratitude. For the most ‘rare’ and euphoric birth.

Driven by love. Ender Ridley Aydin 14/7/2021″, was the legend that accompanied the post, that as the main photo Halsey has, her husband and her baby.

Also, the other postcard is of the newborn in the arms of her mother and being breastfed. Among all the celebrity posts, BTS made a difference and dedicated a post to the artist, where the members wrote “Halsey, congratulations.” Lines below, an account managed by fans of the group, added the photo of the singer and also congratulated her on behalf of the ARMY fandom.

You could also be interested in: JYP Entertainment new girl group set to debut in 2022.

The unconditional friendship between Halsey and BTS was born when they first worked together on the track “Boy with luv” in 2019. The song was so popular that year that Bangtan established their worldwide fame by attending various awards in the United States.

Since the music brought them together, Halsey and BTS have supported each other on each new release. For example, the singer of “Nightmare” shared the photograph of the Korean group’s seventh album asking her fans to listen to it. In addition, Halsey summoned Suga to collaborate on the track called “SUGA’s interlude” which was released in December 2019 as the third promotional single from her album Manic.