The iconic singer Bad Bunny surprised a few weeks ago when he appeared at Royal Rumble to sing the song ‘Booker T’. But it was not all, since he has become a recurring character in WWE functions, a sport of which he is a recognized fanatic.

Now, the Bad Bunny can boast of being a title holder after winning the WWE 24/7 Championship, stripping Akira Tozawa, who moments before had beaten R-Truth, of the scepter. 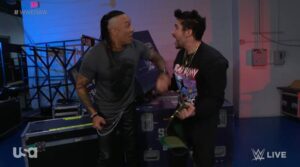 For anyone who is a fan of Bad Bunny, it has to be a doubt that the singer is a huge admirer of professional wrestling, where he has also expressed his wishes to be part of it and now he is not only part, but has also achieved a title which is undoubtedly meaning a lot to him right now.

Madonna rumored to be working on a biographical movie