Anuel AA names himself “The God of Pop

People who accuse the song of plagiarism say the song bears a huge and blatant similarity to Pitbull ft Kesha’s Smash-Hit ‘Timber’. Making the iconic God of Trap angry in the comments and responding to a person who questioned his talent. 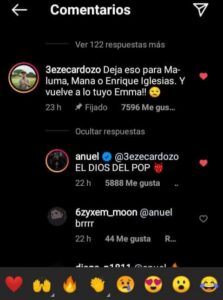 In the comment of the King of urban music it is seen how he also calls himself “The God of Pop”. This generated several unknowns about his new self-proclamation.

Anuel felt angry when he saw how his recent song was compared to the theme song Pop. This since he assures that this genre is Cliché and that the media want to turn the urban genre into Cliché Pop.