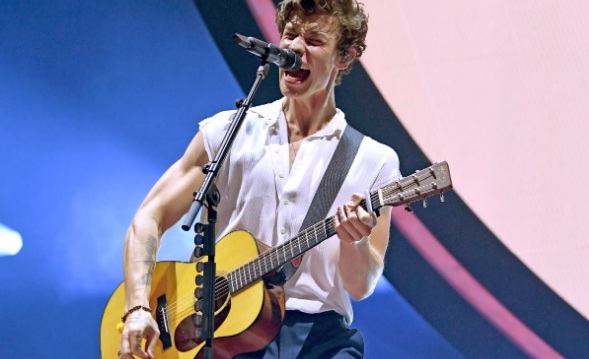 Shawn Mendes released his documental ‘In Wonder’ on the popular platform Netflix. The serie shows the singer behind the scenes on his 2019 World Tour ‘Shawn Mendes: The Tour‘ that went from March 2019 to December 2019. He had a total of 104 concerts.

This documental shows that Shawn had voice issues after arriving to south america. Even in England, the singer asked for help to the fans to sing with him in one of his shows, saying that his voice was very tired.

There’s a scene where the artist is knelling on the floor, behind the scenes, disappointed. In a scene he said:

“If i tell the world that i’m just a normal human are they going to stop coming to the shows?”

“Maybe i should pretend i’m Superman for a little bit longer.”

The swelling of his vocal cords prevented Shawn Mendes from taking the stage of Sao Paulo. The canadian singer told the camera that he woke up sick and stressed.

The doctor of the singer explains that if he is forced to sing that night, he may need surgery on his vocal cords later due to the bleeding. Mendes burst into tears for having to cancel the show.

You can watch the trailer and a part of the documental below!

BTS’ V doesn’t want to sing anymore? Now he wants to do this