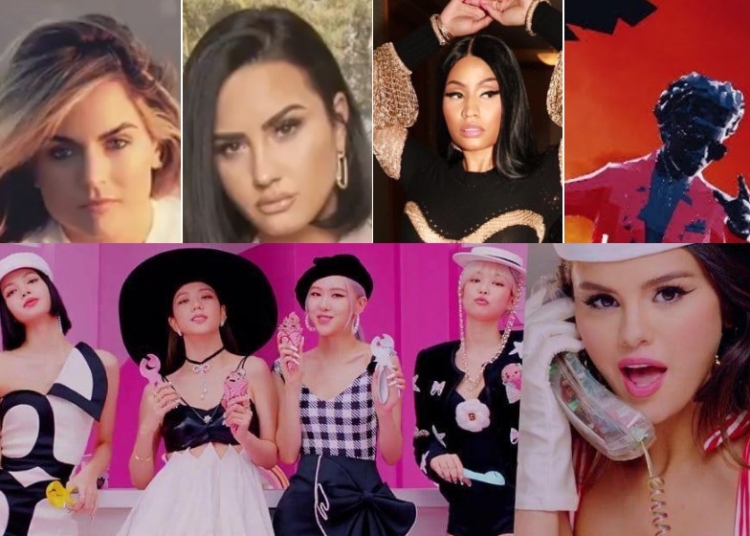 The music industry seems to have come to an agreement to coordinate releases, as at least 10 new singles and videos from mayor artists such as Calvin Harris, Little Mix and tonight’s most awaited project: Blackpink with Selena Gomez.

Let’s take a look at some of the songs and videos that are set to be released in the next 12 hours.

Jaden Smith and Justin Bieber are coming with a new single “Falling For You”, part of his new project “CTV3: Cool Tape Vol. 3”, an album that’s set to be released later this year. The song will be a second collaboration from the two artist since they released “Never Say Never” several years ago as part of the “Karate Kid” soundtrack, a movie which had Smith as the protagonist.

Calvin Harris and The Weeknd, “Over Now”. The single was teased by Abel “The Weeknd” Tesfaye last week with an old picture of the two artists that was posted to Instagram, the collaboration is rumored to be a funk wave type of song.

Ty Dolla Sign and Nicki Minaj with “Expensive”. The song was announced a couple days ago and will be the single from Ty’s next album “Dream House”, This is the rappers third time collaborating, after “Hot Girl Summer”  with Megan Thee Stallion and “Swalla” with Jason Derulo.

British girl group Little Mix will release the music video to their new song “Holiday”, the song was released a month ago but now they are giving it a proper music video, after they didn’t manage to give their last single “Break Up Song” a fully produced music video due to the strict quarantine and had to release a video with clay models of themselves acting as time reporters

Video will be available tomorrow at 10 am BST.

Katy Perry’s album “Smile”, seems to be that the theory about Katy Perry delivering both her new baby and her new album at the same day turned out to be true.  The album will be released later tonight, and features some of the songs Katy released earlier this year such as “Harleys In Hawaii”, “Never Worn White” and the album homonym “Smile”.

Dua Lipa with the remixes version of her last album “Club Future Nostalgia”, which includes remixes of the songs with many artists and two new songs. The album features Madonna and Gwen Stefani, amongst many others.

Halsey with a reversion of her debut album “Badlands”, this time, recorded as the Live Version From Webster Hall. The Canadian singer celebrates the 5th year of this album by releasing this version of the album.

Jojo and Demi Lovato with a remix of “Lonely Hearts”, the singers remix the hit song as a pre-single for Jojo’s re-release LP “Good To Know”.

“Lonely Hearts” is out now with the amazing @iamjojo!! Thank you so much for letting me jump on this track… been a fan since day 1 ? https://t.co/Yt0XxWyEP8 pic.twitter.com/WXHH5MP0yL

And tonight’s Queens are Selena Gomez and Blackpink:

As the singer joins the girl group for a single titled “Ice Cream”, which is coming along with its music video. The song has an upbeat production and a candy theme, the teaser was already released and Gomez seems to show her sexy side that we haven’t seen in a while, as of Blackpink, we can expect some serious choreography as always.

Jesy Nelson is verbally attacked in a restaurant

Does BTS’ Suga have a girlfriend? look at the evidence