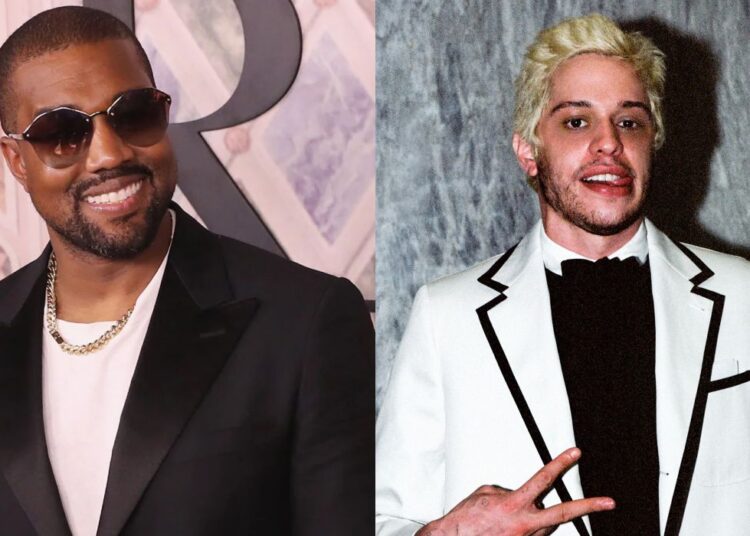 Kanye West, who now goes by Ye, made yet another outburst about his divorce from Kim Kardashian, but this time in the form of a song. Released last Friday, January 14th, in partnership with The Game, “Eazy” is an outburst by the mogul about the things that are happening in his life recently, he also takes the opportunity to attack the current boyfriend of his ex-wife, Pete Davidson.

“God saved me from that accident / Just so I can slap Pete Davidson’s ass”, Ye sings, referring to the serious car accident he suffered in 2002.

Kanye West threatens to beat Pete Davidson’s ass on his new song with The Game “Eazy” ?

He’s allowed to move on with julia fox & dozens of other women in a whole stunts & rap ‘relationships’ but has an issue with Kim K dating? If you’re rapping about Pete Davidson, Pete wins??‍♀️ pic.twitter.com/xI71ftTnwt

On the nearly four-minute track, the singer also calls himself “Mr. Narcissist” and addresses the breakup with the socialite a lot, saying they are having the “best divorce ever”.

Kim Kardashian filed for divorce in February 2021. In December, the rapper acquired a property near the mansion where the star lives with her four children, however, in “Eazy”, he hints that he will raise the children of a differently from now on.

You may also like: Britney Spears to be interviewed by Oprah: “Britney is deeply hurt and angry”

“I have a love for babysitters, but real family is better / Cameras watch the kids, you stop taking the credit“.

“No-custodial dad, I bought the house next door / What do you think it’s really to be rich for?”

“Luxurious and undisciplined y’all need to do some chores / rich kids, this is not your mother’s house“.

Ye also talks about actress Julia Fox, with whom he ‘s recently been in a relationship: “My new b–bad, I know the Illuminati are crazy“.

Discover the price of the new Miss Universe crown, it is a lot