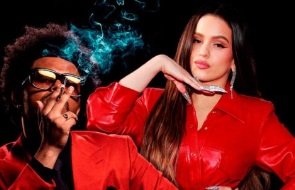 Rosalía will be able to sing along with The Weeknd in the Super Bowl in 2021, the largest television event in the United States that will take place on February 7.

Although there is no official confirmation of this, the Spanish press is circulating the news frequently, even through the magazine ‘Semana‘, which is very popular in the Iberian country.

The Weeknd ran an ad for his Super Bowl show. Only a few days to go. The final of the American football league is scheduled for Sunday. In the video, the Canadian singer appears walking in the stadium on his way to the field, where the show will take place. According to Billboard magazine, this will be the biggest show in Super Bowl history, in terms of duration.

The presentation is expected to last 24 minutes. For now, The Weeknd hasn’t revealed any leads about the show. The Super Bowl halftime show is produced by Jay-Z. The expectation is that this year’s event will echo the “Black Lives Matter” social movement.

The Weeknd released, on its official website, a collection entitled “The Highlights”, with 18 tracks. It may be a clue to what will be on your Super Bowl show. Obviously, 18 songs do not fit in a 24 minute show, but the repertoire must be within that album, as it is the highlight of the singer’s career.

“Spider-Man: No Way Home” grossed more than $1 billion at the box office