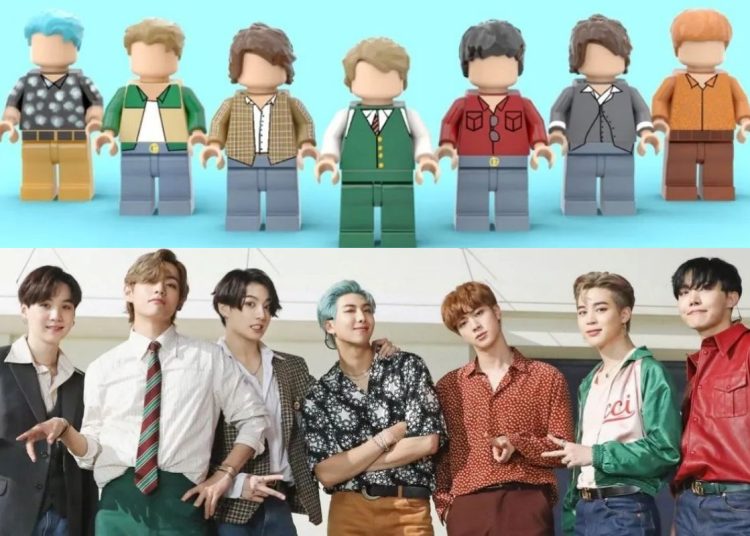 is sharing clues about their next collaboration, on the networks it revealed a purple graphic with a purple heart, in addition, in a brief description it mentioned “seven favorite pop icons” with the assurance that they “will light up like ‘dynamite’“, which automatically reminds BTS.

LEGO IDEAS is a platform where you can submit a design for a LEGO set. If the idea grabs attention and gets 10,000 followers, it’s an opportunity. Years ago, Josh (JBBrickFanatic) and Jacob (BangtanBricks) submitted their design for a LEGO set inspired by BTS’ “Dynamite“.

You may also like: BTS’ RM responded for the first time about his son and revealed if he became a dad

“I saw the success of the music video itself and knew this was a space that needed to be filled in the Ideas lineup. With such a dedicated fanbase, BTS Dynamite’s music video is so iconic.

I teamed up with my friend to make it to the best of our ability, and clearly, from the incredible amount of support, I’d say we did a good job!

“At first, for the first 27 days I had a lot of trouble gaining ground on social media to get the attention of the BTS fandom (called ARMY) and it was a real struggle to get to 81 followers. But then one night Josh did a Tik Tok video to promote the set and it went semi-viral.

We hit 700 followers the next morning and within 24 hours we hit 7K. I think our project has the biggest growth spurt of any ideas project.

After “That, it only took a day or two to get the rest.

By taking these details into account, collaboration is guaranteed. Also, since the presentation was so detailed, you can see a preview of what to expect from the LEGO set.

The set will include all seven members in their 70s-inspired outfits from the “Dynamite” MV. Plus, extra details, like the physical records of the group’s albums, including “Dynamite”, “The Most Beautiful Moment In Life Pt. 2“, and “Love Yourself: Her“.

Omg I sent my “local” friend this from the Lego community after the rumors of bts legos bc she likes legos and she said “I thought this was the office” MAAM PLEASE pic.twitter.com/7TfBHDcliK

(Not sure if this means Hybe has already given/sold the permission for use of the IP to Lego Ideas or if that is a step that will come later during the production process) https://t.co/oh1luyvJHL pic.twitter.com/jWCK2H7NAq

Fan websites for the toy company claim it will be $100 USD for a LEGO brick count of 749 with a March 2023 release date.

For those asking for a link to the BTS x Lego ad, there isn't one. IG ads don't have a link

Learn More sends you to a form that asks you for your name, email address, and contact info