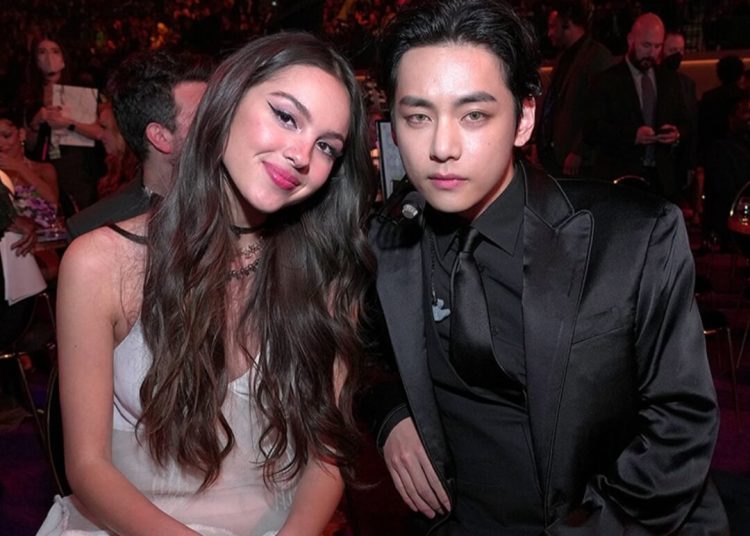 BTS’ V details moment with Olivia Rodrigo at the 2022 Grammys: ‘I was really nervous’

BTS performed at the 2022 Grammys in an incredible performance that left its mark on the ceremony. However, one moment in particular broke the internet that night thanks to V.

There was a surprise appearance by Olivia Rodrigo, where the idol leaned in to whisper something to her before pulling a card from behind her out of her hair and throwing it at Jungkook on stage.

In an interview with Weverse magazine, Taeyung recalls his preparations and feelings during the Grammy performance and his conversation with Olivia Rodrigo.

“I have been asked a lot about this. I was very nervous there because of the choreography of the dress.

A soft whisper in her ear would probably have been enough in this situation, but I think I just said “blah blah blah” without actually saying anything. Before the moment, I thought I could show it on my face or set the scene, and I thought I didn’t have anything special to say, so I didn’t say anything special.

Olivia Rodrigo also knew that this was what I was doing.

For a 10- or 15-second take, the performers don’t have to say anything special and they can still make it fun“, said V.

Talks about their Grammys Performance, skit with Olivia Rodrigo and meeting Lady Gaga.

You may also like: Charlie Puth shares video with BTS’ Jungkook in the production of their collaboration single

“Oh, it was a suggestion from the Grammys people that was accepted on the day of the show. So I had no way of knowing who I would end up sitting next to“, added the idol.

“I thought maybe I should talk to her casually, and it would be like magic if she could steal the card from her without her noticing it as we talk”

“If we had continued the conversation, I might have missed the moment to launch the letter. I was counting the beat in my head the whole time to know when to throw it.

I continued, One, two, three, four, in my head”

“And it was hard to tell exactly what Olivia Rodrigo was saying since she had headphones in both ears at the time. Honestly, I was really nervous“, he finally says.

Reference of Taehyung skit with Olivia Rodrigo during Grammys:

"I kept thinking about the Now You See Me movies. The way the performance on the stage unfolded also reminded me of Jason Bourne, but for talking with Olivia Rodridgo, I thought it was+
pic.twitter.com/e24Kjo7HiK