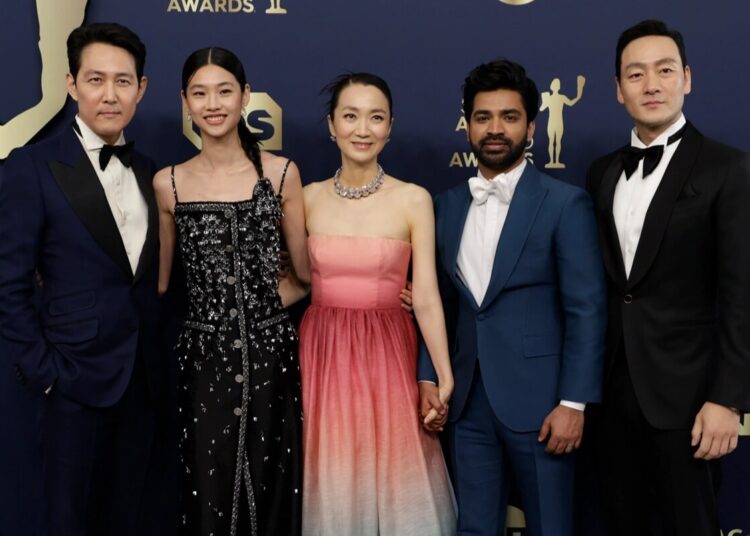 The cast of the ‘Squid Game‘ reunited at the 2022 SAG Awards ceremony after being nominated in four gala categories. Lee Jung Jae, Jung Ho Yeon, Park Hae Soo, Anupam Tripathi, and Kim Joo Ryoung caught the attention of all their fans, and here we tell you how many awards they took home.

The 2022 SAG Awards Awards were held on February 27th, and Lee Jung Jae was awarded Best Actor in a Drama Series for his portrayal of Gi Hun in The Squid Game. The South Korean artist beat out Brian Cox and Jeremy Strong of Succession, among others.

His reaction says it all ♥️ Lee Jung-Jae takes home the Actor® for Outstanding Performance by a Male Actor in a Drama Series! #sagawards pic.twitter.com/efqompdngz

The international model, Jung Ho Yeon, debuted as an actress in the role of Sae Byeok in The Squid Game, a performance that led her to win the SAG Award in the category of Best Actress in a Drama Series, where she beat Jennifer Aniston and Reese Witherspoon of The morning show, among other artists.

Jung Ho-Yeon receives her first-ever Actor® for Outstanding Performance by a Female Actor in a Drama Series for her role in #SquidGame #sagawards pic.twitter.com/PJAHCavDni

You may also like: NCT Dream confirms comeback, according to SM Entertainment

The cast of the Netflix series The Squid Game won in the category of best performance (stunt team) at the SAG Awards 2022. The award was revealed moments before the central gala held in California began.