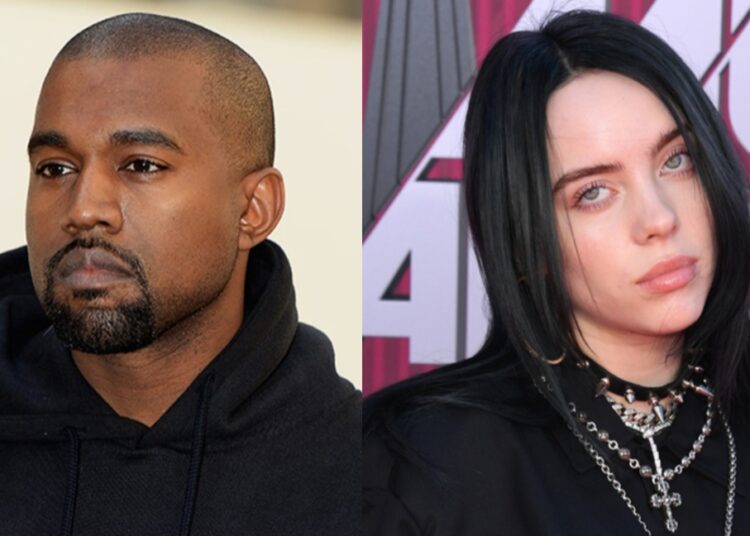 Kanye West posted on his Instagram on Thursday, February 10th, asking Billie Eilish to apologize to Travis Scott. It all started when the rapper shared a news shared on social media, which suggested that an attitude by the singer, who stopped a show to help a fan, on Saturday, February 5th, would have been an indirect to Scott.

“I need her to apologize“, Ye said in the post’s caption. At the end of the text, he even threatened to stop performing at Coachella if she didn’t recant.

“And yes, Trav will be with me at Coachella, but now I need Billie to apologize before I introduce myself“, It is worth remembering that both artists are in the line-up of the event, in April.

To better understand the situation, last weekend, Billie stopped a show on the “Happier Than Ever World Tour” when she saw a fan with an asthma attack in the audience. When interrupting one of the songs she said: “Do we have an inhaler? Can we get one? I hope people get well before continuing”, she commented.

Despite the attitude being praised by many, West interpreted the situation in a different way and reposted on social media the headline, mentioning the situation, saying that she would have needled Travis Scott. In this case, he was referring to the tragedy of the Astroworld festival, which ended with fatal victims.

“Come on Billie, we love you. Please apologize to Trav and the families of the people who lost their lives.

Nobody intended for this to happen.

Trav had no idea what was happening when he was on stage and he was very hurt by what happened”.

Kanye West says he won’t perform at Coachella unless Billie Eilish apologizes for allegedly dissing Travis Scott at her concert:

“COME ON BILLIE WE LOVE YOU PLEASE APOLOGIZE TO TRAV AND TO THE FAMILIES OF THE PEOPLE WHO LOST THEIR LIVES NO ONE INTENDED
THIS TO HAPPEN,” pic.twitter.com/KNm3ZkrfY3

You may also like: This is what Tom Holland did to see Zendaya in Euphoria

However, in the comments of Kanye West’s post, Billie Eilish responded to the messages. In the post, she commented that she never talked about Travis Scott and that in that situation where she stopped her show it was for the benefit of her audience.

“I literally never said anything about Travis. I was just trying to help a fan”, added the 20-year-old star.

The new Miss Universe of USA talks about fraud accusations: “They make me laugh”