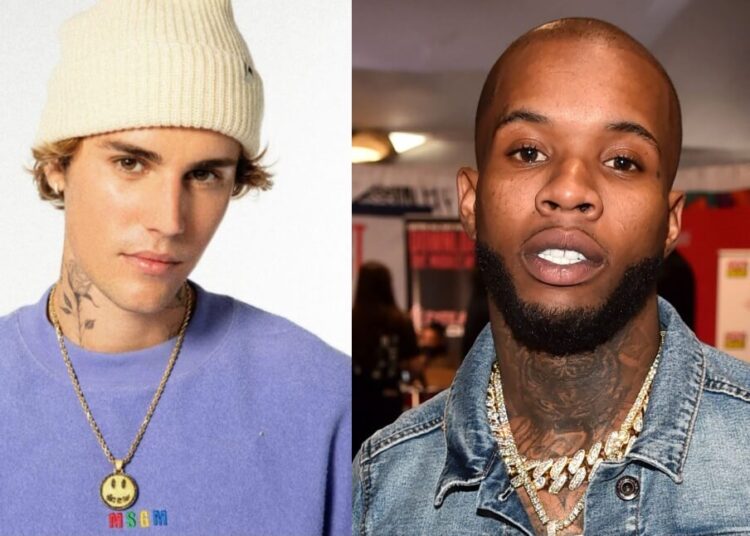 Justin Bieber appeared in a new photo alongside Tory Lanez, the rapper accused of shooting Megan Thee Stallion in 2020. The image was shared by the rapper on Tuesday, February 8th, on Instagram.

In the caption, he wrote:

“One of the most honest and solid people I’ve met throughout my career, an incredible human being… Timeless soul! I owe 1000000 favors”, Lanez wrote.

Tory Lanez and Justin Bieber appear to be working on an upcoming project together. pic.twitter.com/ejXvxueGR0

On July 12, 2020, Megan Thee Stallion was grazed in the foot while leaving a party in the Hollywood Hills neighborhood. At the time, it was reported that Canadian rapper Tory Lanez was the author of the shot, fired during an argument between him and the rapper inside a car, parked in front of the event site.

Megan even published images of her injured foot to prove that she was actually shot. The rapper was arrested and indicted by local authorities. Although he posted bail and got out of prison, the police are still investigating the case.

Court decisions prevent him from commenting on the case publicly and force him to keep his distance from the rapper. In December 2021, he was summoned to the Court for a deposition.

Around the same time, a detective investigating the case revealed that Lanez asked Megan to dance for him before the shooting.

You may also like: The most outstanding outfits at the BRIT Awards 2022

Later, the rapper reportedly asked her not to tell the police. Also last year, Megan fell out with DaBaby, with whom she was a working partner, over a song he released with Lanez and mocking comments about the case posted on Twitter.