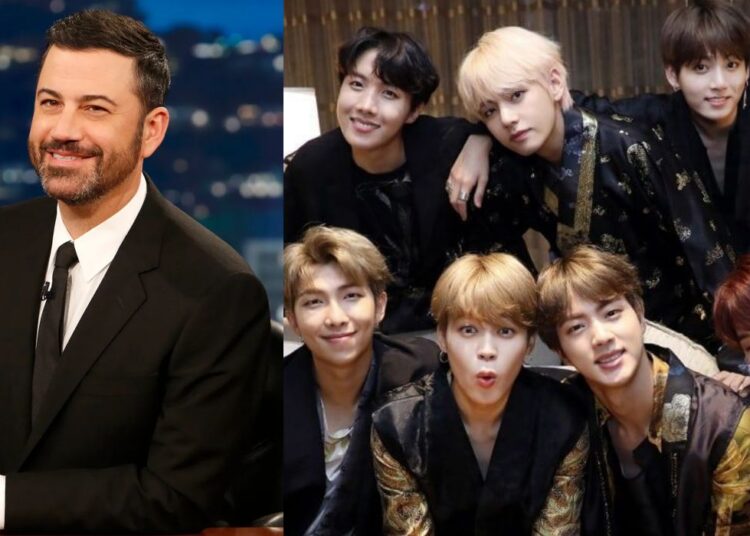 After James Corden provoked the fury of ARMYs, now it’s Jimmy Kimmel‘s turn. The American TV presenter made a controversial statement on a recent episode of his talk show comparing BTS fans to Covid-19, a disease that has claimed the lives of more than 5 million people around the world.

Kimmel hosted actress Ashley Park on her show, she is cast in “Emily in Paris” and covered “Dynamite” on the series. Members RM and V even praised her work on social media. In the chat, Kimmel made lame jokes related to the K-Pop group. First he said that ARMYs could attack her, but Ashley turned out to be a fan, so he backtracked.

Ashley Park sang our song ‘Dynamite’ in Emily in Paris Season 2. I’m watching this in a very upbeat surroundings. This makes me very delighted because our songs are still being listened by people all over the world. Oh my god, thank you! pic.twitter.com/eoKiGQccd2

The actress said she was at the nail salon when she found out that V had posted the video of her “Dynamite” performance. She recalled that her hands were shaking so much that it was a miracle to finish painting her nails:

She felt like she was going into shock and thought it was just an intense reaction given her admiration for BTS. But at the end of the day, the symptoms Ashley was having were actually Covid-19. She explained that she would never have guessed that she had tested positive because she thought her body was just “melting” because BTS noticed her.

You may also like: Famous producer says he hopes to work with BTS’ Taehyung on musical

“You thought it was BTS fever”, Kimmel said and the actress.

“They are both very dangerous. You are lucky to make it out alive”, he dropped.

Jimmy Kimmel interviewed Ashley Park who did the cover of dynamite on the tv show ‘True Emily in Paris’ and namjoon + tae posted it on Insta -she was talking about how she got COVID afterwards then jimmy went ahead and compared BTS to the virus and said ‘they are both dangerous’+ pic.twitter.com/Pgro99uKLc

Since the beginning of the pandemic, Asian people have been blamed for the spread of Covid-19 and many people found Kimmel’s joke racist. Netizens were especially shocked that he spoke in front of a woman of South Korean descent who is a fan of the K-Pop group.