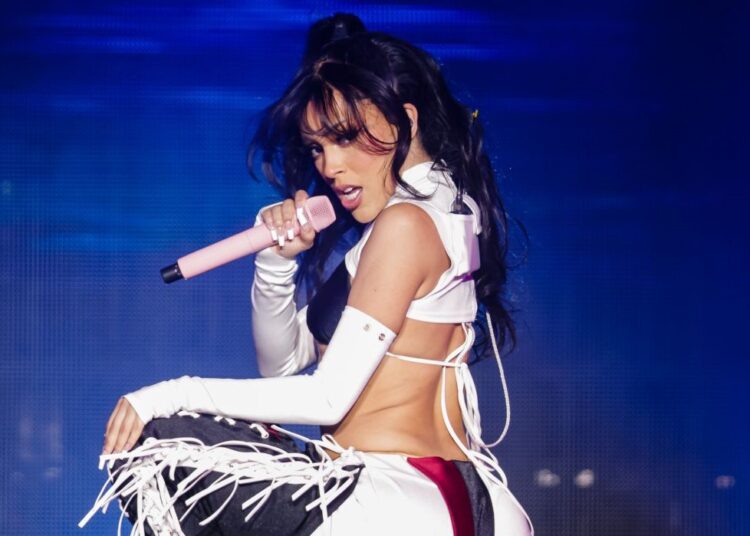 According to TMZ, a fan of Doja Cat was arrested yesterday, January 8th, in Indianapolis, in the United States, after carrying out a bomb threat at a concert by the singer. According to the information, the fan was impatient and wanted to cut the line to get in. In a failed attempt to intimidate those around him, he said he carried a bomb in his backpack!

It didn’t take long for police officers to be called to the scene and, luckily, they didn’t find any explosive material. However, the fan in question ended up being arrested on unrelated outstanding warrants!

As if this situation wasn’t tense enough, at one point, Doja Cat had to stop the performance to break up a fight that was going on in the audience! The confrontation started after the artist threw a pair of drumsticks to the audience. In the images released on the internet it is not possible to see the fans who were fighting, but we can see the singer asking for calm.

.@DojaCat briefly paused her performance to stop fans from fighting during the #CFBPlayoff pic.twitter.com/W3WRFy9vJS

You may also like: Rihanna announces first Savage X Fenty stores in the U.S.

In other related news, The album “Planet Her”, by Doja Cat, appeared in the main lists of best records of the year in 2021, which raises the expectation for the next project of the American rapper. After all, will the artist be able to repeat her success and climb high positions on the music charts?

In a recent live on Instagram, she showed that she already has ideas for a successor to “Planet Her”. The rapper revealed her desire to make a double album, in which seven tracks would sound similar to what she currently presents, a pop-rap, and another twelve songs would be purely hip-hop, produced by names like Jay Versace and 9th Wonder.

.@DojaCat talks about plans to release a double album consisting of a Pop-Rap side and a Hip-Hop side. ?pic.twitter.com/IOW4ViZQha