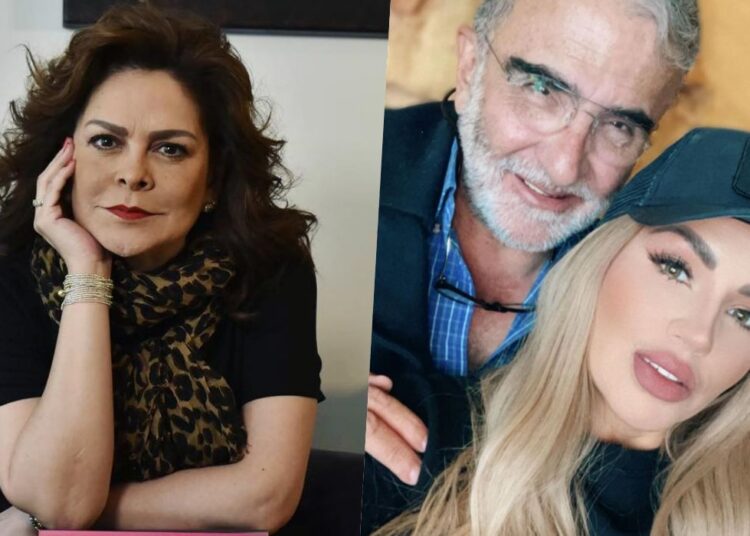 During the coverage after the death of Vicente Fernández , Mara Patricia Castañeda , had the opportunity to meet and interview Mariana González , girlfriend of her ex-husband, Vicente Fernández Jr. , and the reactions of both women were completely unexpected.

Mara, the renowned journalist, was married for eight years to Vicente Jr., for which she maintains a close relationship with the Fernández family. The extensive coverage that the journalist carried out at the singer’s funeral that took place at the famous ranch ” Los 3 Potrillos “.

The journalist recognized Vicente Jr.’s current partner, Mariana, and approached her car to do an interview , to which the young businesswoman agreed and made a gesture towards her boyfriend’s ex-wife that caused surprise among viewers.

Among his words before the camera Mariana took Mara’s hand and recognized the admiration and respect he felt for her, and was grateful for the affection towards Fernández dynasty, then decided to kiss the hand of the journalist.

For his part, the communicator asked him not to do it, the reaction was of total surprise, because he did not expect to have such a meeting. Finally, he asked to greet Dona Cuquita , the widow of the late singer.

In other related news, Vicente Fernández, considered an icon of Mexican ranchera music , passed away this Saturday, December 12 at the age of 81. The singer is considered one of the greatest exponents of regional Mexican music worldwide.

The interpreter of ” Pity that you’re alien ” and ” For your damned love ” had been admitted to a private clinic in Guadalajara since August after suffering an accidental fall at his ranch, which caused trauma to his cervical spine.

The LGBTQ+ shows you need to watch as soon as possible

BTS’ RM shares a special tattoo photo, will the group finally get the matching tattoo?