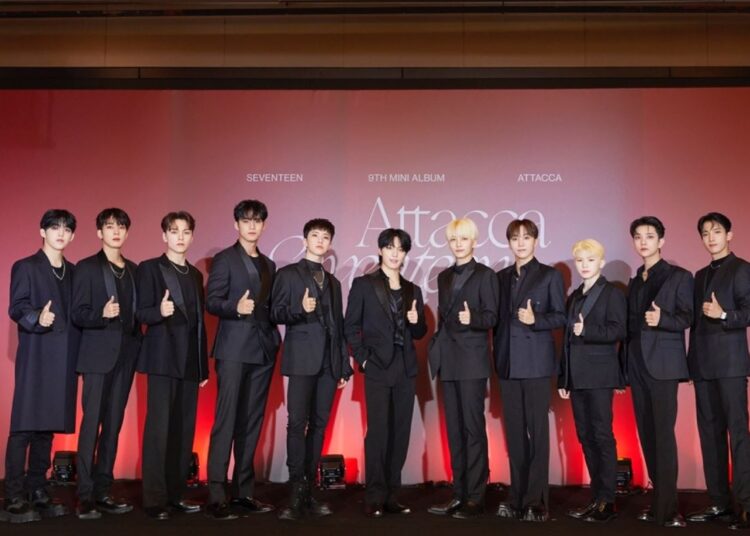 After making an impressive debut on Billboard’s top album chart with their previous album, K-pop band SEVENTEEN now has a bigger ambition for their new album: the number one spot on the “Billboard 200” chart.

The 13-member group released their album “Attacca” on Friday, with the title track “Rock with You.” “After listening to our music, we thought ‘we made it!'” The band said during a press conference broadcast online on Friday. “We wish to reach number one on Billboard with this album.”

The previous six-song extended play album “Your Choice” peaked at 15th on the “Billboard 200” chart in the first week. This marked the first time the K-pop band had made it onto a top Billboard chart, for albums or songs, since their debut in 2015.

For the American music market, the group’s latest mini-album, their ninth, includes the band’s first English-language song, “2 MINUS 1,” written and performed by the two US-born members Joshua and Vernon.

You could also be interested in: TXT: Hueningkai’s younger sister will debut on new girl group KEP1ER.

The singers said they chose a style of music that best represents their message. The singers also added that, on ONE next occasion, they hope to be able to perform a song entirely in English with all the members of the band.

Ahead of the album’s official release this Friday, the new album, which talks about the members’ passionate love for one person, recorded more than 1.4 million anticipated sales worldwide.

It is estimated to become the group’s fifth million-selling album, following “Your Choice,” “Heng: garae,” “Semicolon,” and “An Ode.” The leader of the band, S. COUPS, said that they know that the milestone in the number of sales of their albums is due to their efforts, so they want to thank all the members of the staff and the fans of the band for their support.