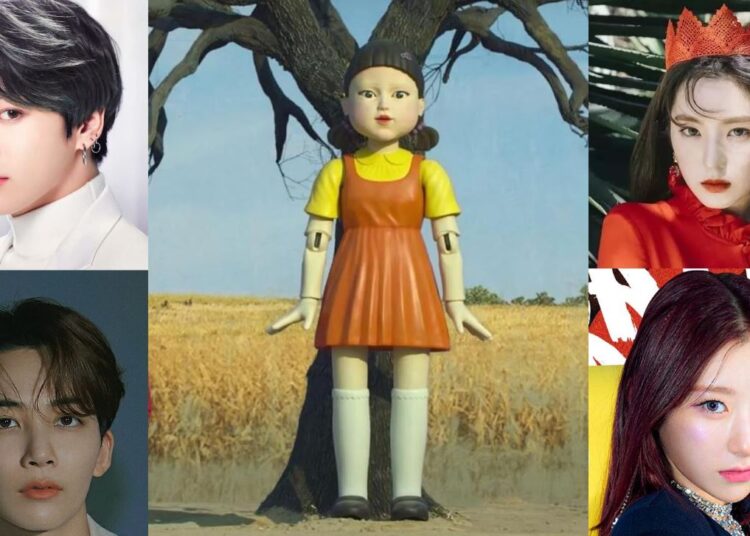 If K-pop idols had the misfortune to participate in Squid game, who or who could win? Following the incredible success of the globally sweeping Korean series on Netflix, fans raised and resolved this question. The result: a top 10 favorite candidate.

LOONA’s Hyunjin is one of the most athletic idols out there. This could lead her to overcome the games of the grim series.

You may not know it, but Jaemin used to be known in his high school for being a great sportsman, this could lead him to beat most games and hopefully take the money!

Jackson Wang is ridiculously athletic and good at strategizing, he has shown it in the appearances he has had on competition shows as well as being a participant in the Olympics.

The fans bet on BTS’ Jungkook, an idol who could fulfill all the games without much effort because of his characteristic competitive spirit.

6. Hyojung (OH MY GIRL)
The sweet main vocal and leader of OH MY GIRL captures so much attention for her determination and emotion in the games that her opponents end up being distracted and losing in the end, her followers comment.

5. Minho (SHINee)
No matter what competition he’s in, Minho, the ‘Flaming Charisma’ and ACE of K-pop, he will always go fiercely to get first place.

4. Chaeryeong (ITZY)
Meanwhile, Chaeryeong, Chaeyeon’s younger sister and member of ITZY, could stay safe in The Squid Game thanks to her unstoppable competitiveness.

3. Irene (Red Velvet)
The leader of Red Velvet, Irene, enjoys a virtuous mixture of intelligence and calm, necessary characteristics that allow to find fault in the challenges and to be able to pass over them.

2. Jeonghan (SEVENTEEN)
Known for having a fun reputation for cheating in games, SEVENTEEN’s Jeonghan would find a way to beat the system and move the rules in his favor in the same vein as Sang Woo in Squid game.

RM has an IQ of 148. As a high school student, he was in the top 1% of all of Korea because of his incredible intelligence. Also, the idol has been exercising lately. The perfect requirements to win the squid game.

You could also be interested in: BTS: Kim Taehyung shows off his body and arm muscles while working out.

BTS’ Jungkook shows his back and drives fans crazy