For at least three days, BTS’ Jungkook has been criticized by some netizens who accuse him of backdoor advertising his brother’s business. Although the singer recently resigned from his position as in-house director at the aforementioned company, the controversy continues on local akgae forums.

On October 1, an akgae said in a local newspaper that he had filed a complaint against the K-pop star with the trade authorities. Six6guys, the company’s name, introduced the Graffiti on mind line earlier that month and Jungkook wore garments from this company within days of the launch. 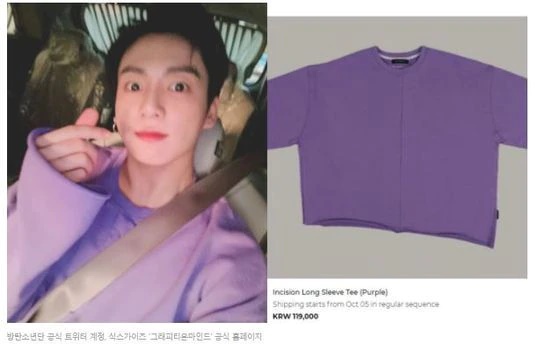 He posted a selfie on social media of him and also wore a brand shirt on a VLive broadcast for his birthday. The netizen who filed the complaint with the Korea Trade Commission (FTC) argued:

“BTS is a superior group representing Korea and has astronomical status. Although Jungkook did not mention a review of the product or ask fans to buy it, just giving the brand exposure can boost your earnings beyond belief. I believe that this incident is against the fair and free market and is something that the Trade Commission prohibits. I hope the authorities will investigate what happened”.

You could also be interested in: TXT’s Beomgyu has intense flirting with a fan.

However, other netizens consider this accusation to be exaggerated. According to Money Today medium, the FTC determines that it is disguised advertising when influencers or celebrities don’t specify the recommendation of a product, but have received payment or sponsorship for it.

This recommendation can be in the form of repeated exposure of the product, by posting a link to buy or by reviewing the benefits of the product.

BTS fans note that “Jungkook did not mention or hint at the garment he was wearing and it is difficult to assume that he had commercial intentions.” In fact, the garment was only seen wearing on two occasions.

Jungkook just wore a t-shirt it's totally his choice.He never told anybody to search up about this t-shirt & to buy it or never showed or talked about the brand. Some anti fans got the info & accusing him for the false advertising wow! LET'S PROTECT JUNGKOOK #ProtectJungkook pic.twitter.com/L6wusqPiml

They also add that it is customary for ARMY to investigate on their own what products their idols wear or appear in their videos. “It is excessive to want to blame Jungkook for something that his followers are interested in voluntarily,” stated K-fans of BTS as quoted by Starnews. “At this rate he will not be able to wear clothes,” they ironized.

BTS reveals the 48-song tracklist of their upcoming album “PROOF”