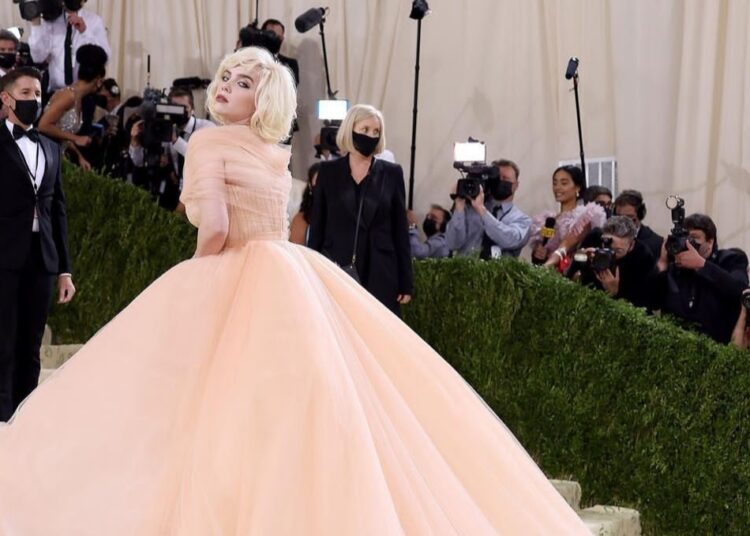 The theme “United States: A Lexicon of Fashion” allowed celebrities to show us their best outfits. On this occasion, Billie Eilish was the one who took the night with a dress that pays tribute to the great divas of American gold cinema.

Without a doubt, the off-the-shoulder neckline is a hallmark of old Hollywood ball gowns, so the tiny corset that accentuates the singer’s curves is a nod to the timeless sensuality of Marilyn Monroe.

The most obvious reference to the protagonist of The Gentlemen Prefer Blondes is found in her hair and makeup: a bob cut with waves in a platinum blonde tone in which blush and lipstick stand out.

While her floaty skirt with a 5-meter long train adds the graceful touch of Grace Kelly, this design is fit for a princess!

The big dress represented a mobility challenge for Billie Eilish, who needed 5 assistants to move on the red carpet. Even so, the interpreter of ‘Bad guy’ does not regret the choice of her, because she not only stole the glances throughout the night, she also helped a good cause.

Although Alex Bolen, CEO of Óscar de la Renta, had received countless requests to remove animal skins from his fashion collections as an unethical practice; he himself refused to do so because of tradition.

The brand tried to contact Billie, but the response was not encouraging, as the singer, who is also vegan, only works with cruelty free brands, so she was not interested in wearing her dresses.

These words were a revelation for the director of Óscar de la Renta, and that was how he negotiated with the interpreter of ‘Lovely’ the elimination of animal skins in future collections if Billie became her muse for the MET Gala.

Óscar de la Renta is a great influence in the world of fashion.
C

Surely, his actions will inspire many other brands to also eliminate unethical practices in their garments.

AESPA shares a new teaser for their debut single