According to rumors, the Irishman approached the singer to ask for a photo, and he refused. Enough to light the UFC fighter fuse.

The controversial fight between Conor McGregor and the singer Machine Gun Kelly on the MTV VMAs has social networks on fire, and according to the TMZ portal, this was the pass.

A source close to Conor tells that the fighter wanted to greet MGK, put out his hand and started walking towards the singer. Apparently MGK said something – that Conor couldn’t hear and security started pushing the Irishman to get closer to us. The source says that Conor didn’t understand what the problem was, and was shocked at how he was treated. Enough for him.

When he walked back a few feet, he grabbed what was left of the drink, and threw the drink at Kelly, as well as his partner, actress Megan Fox, who was clinging to him.

Conor McGregor threw a drink at Machine Gun Kelly at the VMA's ?

Their respective safe havens separated the two before things got really ugly. Although the truth is that the images and videos that circulate are really unpleasant, it does seem that they did not get to contact each other. Of course, as soon as Conor McGregor has barely recovered his health, we already see the guy wanting to face an opponent. Although “I only fight with real fighters … The truth is that I do not fight with little white vanilla rappers … I don’t know anything about him except that he is with Megan Fox,” said the Irishman in interviews on foot of the event after the altercation. 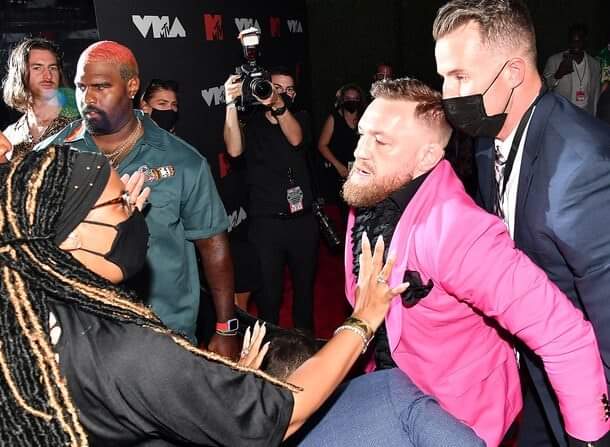 It all happened just an hour before the event, and the scene was captured by several photographers. In case anyone gets confused, Conor is wearing a pink suit and MGK is not far away … CMG can also be seen trying to reach Kelly, but it does not seem that he will catch him, he is only seen somewhat furious in middle of the red carpet.