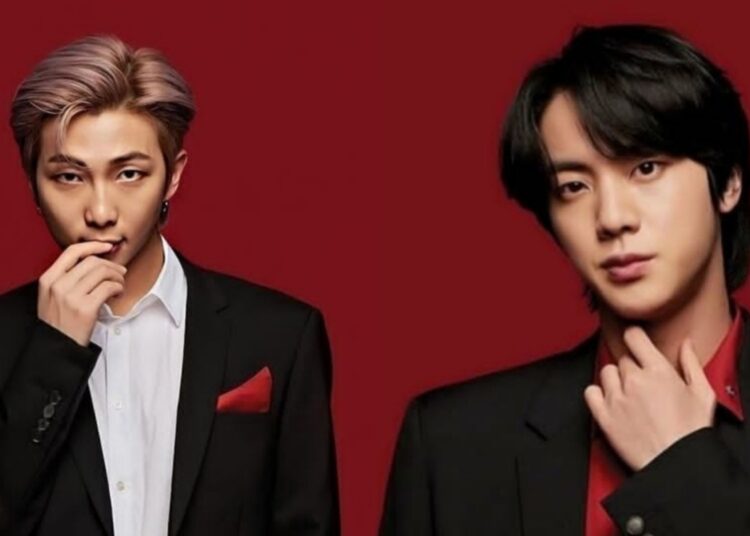 When we thought we knew everything about Jungkook, RM and Jin arrive to teach us a lesson that we had no idea about the dirty secret of BTS’ Golden Maknae.

At first glance we all hide secrets, because only the people we live with can know our biggest secrets: the gastronomic experiments or attitudes and customs that we have, but we do not show it outdoors. Now imagine living with RM and Jin, who are always on the lookout for everything the BTS members do, particularly Jungkook.

It is well known that the Bangtan Sonyeondan live together, so only they know each other better than anyone.

However, the boys like to share with ARMY some details of his private life and more of the smallest member of the South Korean band. There is no doubt that some members of BTS should be careful of RM and Jin’s gaze.

The leader of BTS and the Worldwide Handsome took to VLIVE to share a few moments with ARMY, update them on how they are doing and, incidentally, have fun. The boys showed their good humor, their exquisite palate at the time of tasting a dish, as well as they had time to joke with each other and, inadvertently, reveal a Jungkook secret.

Jin started by saying that today’s contribution from him was that “Jungkook hasn’t washed his hair in two days”, but RM didn’t play along as he asked him a question: “What about Hyung?

” Quickly, the Worldwide Handsome replied, “I did it this morning. I’m very clean! “, But it seemed that Namjoon had other data when asking him:” What is the longest time you have spent without doing it? “.

Seokjin can’t hide it anymore and said “6 days”, later he added “I don’t wash my hair if I don’t have a schedule!”. Jin’s answer left RM with his eyes wide open, who proved that he was the cleanest member of the group as he made this comment “I wash my hair twice a day”.

During VLIVE, the fandom took to their social networks to write that now everyone was going to know that Jungkook did not wash his hair for two days, and all thanks to Jin’s words. In fact, on Twitter the conversation between the Worldwide Handsome and RM was replicated throughout the social network and they even made memes referring to the dirty secret of the Golden Maknae.