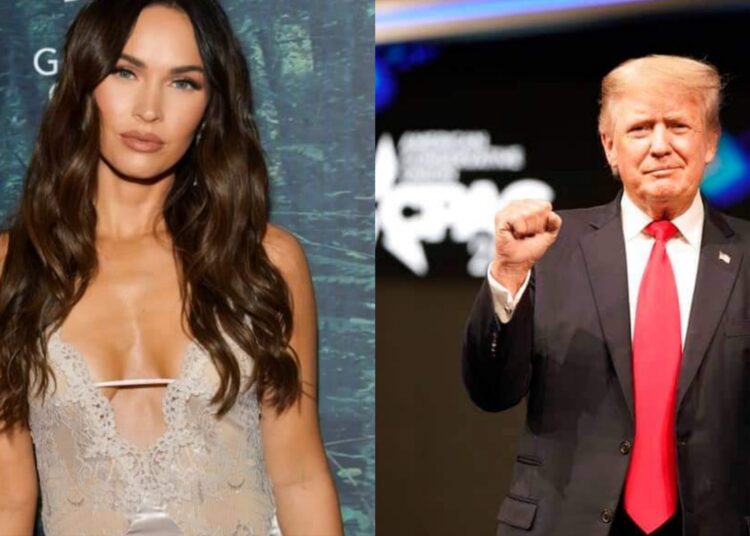 The popular actress has received criticism for having called former President Donald Trump a ‘legend’, but the actress has now had to explain why she told the American mogul that way.

During her latest interview in Jimmy Kimell Live, The actress Megan Fox spoke about her experience attending this weekend’s UFC 264 game in Las Vegas, revealing that she was sitting in the same row as the former US president and mogul.

In the interview, Megan has clarified the rumors of her, since many people, especially supporters of Donald Trump, believe that she called him ‘legend’. However, she has claimed that she said it otherwise.

Social media was divided for and against the alleged ‘legend’ call that Meghan made towards Donald Trump. Some strongly against and others in favor (Trump supporters). The situation got out of the hands of the actress, since many Republican Twitter accounts in support of Trump vilarized what happened.

It is for these reasons that Megan has explained in detail why she told Donald Trump ‘legend’ at the time. The actress commented on the following in her most recent interview:

“I never said Donald Trump is a legend,” I said he was a legend, but in that arena because a lot of people applauded him”

The arena was packed with fans of UFC fights. Many of them clearly Republican, based on the insane crowd reaction he received upon entering the T-Mobile location, that was an observable fact. The actress culminated with the following:

“I was in line with Bieber, and Trump was in my line too, he had like 30 secret services with him. I said he was a legend because that arena was very supportive of Trump when he came in.”

“I was like, I don’t know how I feel about it, because if someone is a target, then I say, I might get hurt because I’m adjacent to where he is. Concerned for my own safety, that’s all that mattered to me. But yeah, I’ve never seen anything like it before. It was crazy. “

What do you think about the statements of the renowned actress?

BTS Jimin’s impacts with a Performance on iHeartRadio Festival