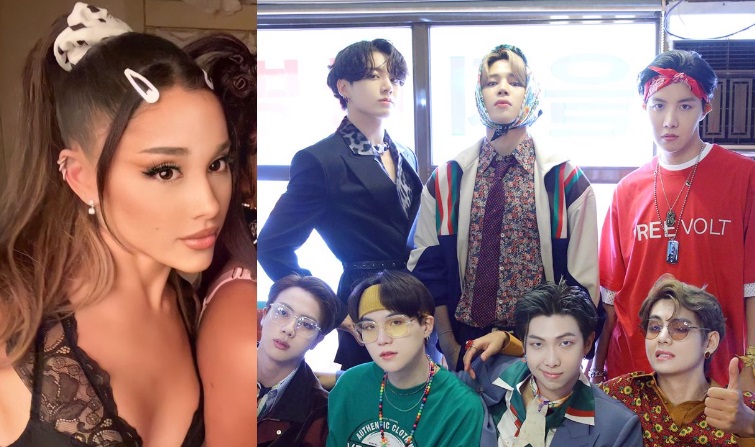 “We have always wanted to collaborate with Ariana. She is one of the best.”

BTS’s RM said during an interview with Billboard last year.

On January 20, rumors circulated on social media that an unknown “insider” had hinted that there might be a collaboration between BTS and Ariana Grande.

According to Allkpop, the insider previously leaked remixes of The Weeknd’s “Blinding Lights” and Ariana Grande’s “34+35″

Zayn’s latest album and the collaboration between Saweetie and Doja Cat with “Best Friend”. Although nothing has been confirmed from Big Hit Entertainment or Ariana; fans take it for granted that Ariana might be collaborating with the popular K-pop band.

Most of the fans are delighted with the possible collaboration. These fans believe the collaboration will be iconic, citing them as the “collaboration of the year.” However, it seems that some Arianators are not happy. They claimed that BTS was “using” Ariana for “views” and as an opportunity to enter the western market.

All the above are just rumors, nothing confirmed yet. Although apparently, the interpreter of “Positions” is already part of the ARMY fan club; because in the teaser for his upcoming music video “34 + 35 remix” in collaboration with Doja Cat and Megan Thee Stallion, he appears reading a magazine with RM, Jin, J-Hope, Suga, Jimin, V and Jungkook on the cover of this.

The music video will be out today at midnight and promises to be full of glamor and talent with the three girls of the moment. It is not yet known if the boys of BTS will have a much bigger participation in the MV; is it a clue from their collaboration or Ari just added them out of love.