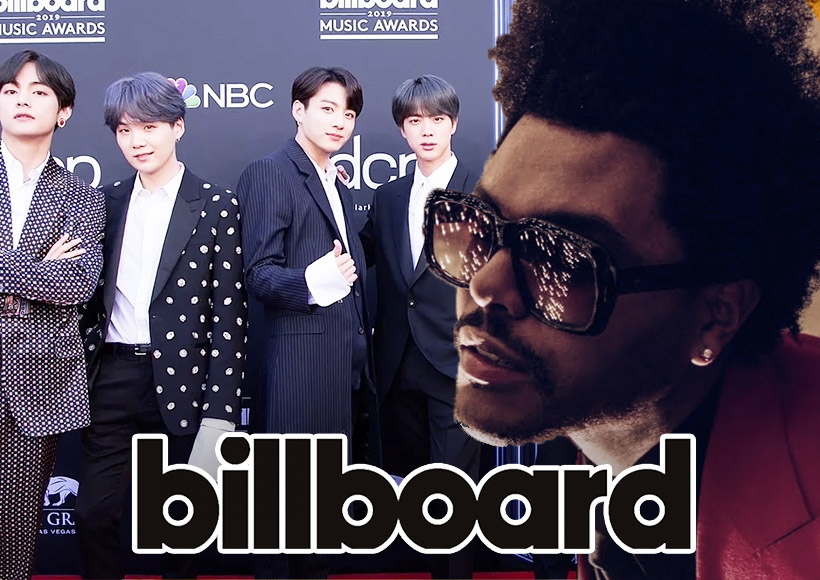 From merchandise, top remixes and massive discounts. The 2020 on the Billboard Hot 100 has easily been the most disappointing of all Musical years.

The world of music was severely affected by the Covid-19 pandemic. Consequently, many artists chose to delay their musical projects.

Aexample of this was The Weeknd, who enjoyed great success for his album “After Hours” and his Smash-Hit “Blinding Lights”. Hit that has experienced one of the biggest hits ever. Making the song hit number one on all existing popularity charts, including the Billboard Hot 100.

Despite all the problems, “Blinding Lights” is a global hit. However, some songs by other Artists did not have this level of popularity even if their singles reached #1 in the Chart. But why did they go unnoticed?

If Billboard was lacking in credibility, this year it has completely lost it. In a year like none, the Hot 100 has had more #1 singles in 2020 than any other year on record. Many of them debuting directly at #1 and slipping into their second week or opting for desperate methods to stay in the top positions.

Sadly the vast majority of this year’s #1s opted for somewhat desperate methods to reach the top. From merchandise, remixes, excessive payola, exaggerated promotions, massive discounts and other very rare techniques. All of them achieving their goal, but fading extremely quickly.

The first unfortunate #1 of this year was “The Scotts”, by the famous rapper Travis Scott in collaboration with Kid Kudi. They chose to sell different merchandise of clothes, where they gave away the single in exchange for them. In addition, they placed massive discounts on the main digital sales platforms. This allowed him to debut at #1, but falling to #11 in his second week.

The second case is one of the most desperate of the year. Newcomer rapper Doja Cat was enjoying the success of her hit “Say So”. She created a large number of remixes with Nicki Minaj, where she also used excessive payola, overpromotion and other techniques for achieve #1. Which meant the first for both, where Nicki Minaj finally achieved it after more than 100 entries on the Chart.

The song dropped to #2 in its second week.

The third case is one of the most controversial without a doubt.

The battle between “GOODBA” by Tekashi 6ix9ine and “Stuck With U”, by Ariana Grande and Justin Bieber, led to a fight between both parties. Tekashi denounced that Ariana Grande’s team, apart from offering autographed CDs, were buying the song themselves.

“Stuck With U” emerged victorious and managed to debut at #1, but falling hard in its second week to #12, even lagging behind “GOODBA” and unable to re-enter the top 10 on the Chart.

In the fourth case we have rapper Tekashi 6ix9ine again, but this time in collaboration with veteran rapper Nicki Minaj. And it is that after the conflict that he generated with his previous single, the rapper swore that he was going to use the same techniques that Ariana Grande and Justin Bieber used to reach #1 with his collaboration.

“TROLLZ” was the name of the collaboration between Tekashi and Nicki Minaj. This song was not very well received by music critics, and it had a moderate performance on streaming platforms. However, they managed to debut at #1 thanks to the sales technique of signed CDs, discounts, trade-in promotions on merchandise from clothing to accessories.

But, the joy would not last long since in its second week the single earned a disgraced record.

It became the biggest #1 drop in chart history.

Falling nothing more and nothing less than 33 positions.

“Franchise” a song between Travis Scott, Young Thug and rapper M.I.A managed, to everyone’s surprise, to debut at #1 a few months ago. Achieving it thanks to nothing more and nothing less than the copies that the rapper gave away in Macdonalds stores. This happened due a campaign of the famous fast food network with the rapper, where even toys physically similar to Travis were created.

The song dropped massively in its second week to #26, entering the disgraced #1 disappointing chart.

“Life Goes On” was the last song to join the disgraced list. Popular Korean Boyband “BTS” had already made it to the top with “Dynamite”; which also used various techniques such as discounts and remixes which nevertheless served to keep him stable at #1 for 3 weeks. The Remix of Jason Derulo “Savage Love” that despite reaching the top in its opening week, was even discredited from the Chart for its poor sales in its second week.

The popular boys then released “Life Goes On” a song that served as the second single to their new album “BE” that reached the top of the Billboard 200. But unfortunately the latter could not remain as its predecessor “Dynamite”, causing that in its second week it fell to position #29. The second largest fall being #1 and also being about to break the record of “TROLLZ” as the #1 single with the fewest weeks in the top 100 overall (only three weeks).

That is why 2020 is named as the most controversial year in the hot 100. It started with the large number of songs that reached #1, the incredible records of permanence of “Blinding Lights”. The numerous remixes, discounts and others. techniques that were used and ended up generating the largest drops ever recorded.

Next week, Taylor Swift’s “Willow” would be hitting #1 on the Chart with various techniques never seen before on the popular Artist of the Decade: Numerous covers and remixes, and a discount of up to 0.39 cents. Thus being widely prone to generating a large drop in its second counting week.